3+ (ELSPA)
E (ESRB)
The Emperor's New Groove is a video game based upon the 2000 film of the same name. It was made for the PlayStation, Microsoft Windows and Game Boy Color (a Nintendo 64 version was planned but never released).

Emperor Kuzco has been transformed into a llama, and must transformed back into a human. To achieve this, Kuzco must venture towards Yzma's palace. However, Kuzco has been transported into a peasant's village and must find his way to the palace. The player guides Kuzco through eight levels, each with their own mini-levels, depicted on a map/menu. Upon meeting Yzma, Kuzco must race for the potion.

There are also many secrets to be found within the game, each with something that would help Kuzco get Gold Coins.

Throughout the game there are many silver and gold colored coins lying around, which Kuzco must pick up in order to get his Gold Coin (earned by getting all the coins in a single level). Some coins are in enemies, if the player defeats an enemy, they get a coin.

Also appearing in each level are Wampys, which are continues. If Kuzco's five chance life crown is fully red, and he dies, the Wampys make him healthy again, and he replays from his last checkpoint.

Checkpoints are statue-like objects in the game, which, when Kuzco runs through them, and says "Checkpoint!". These checkpoints are areas that, upon dying, the player starts from again.

The amount of lives the player has are displayed in a crown-shape above the game screen. The crown has five main areas. Once all are diminished, the player starts the level over again.

The 'No Touching' rule in the movie applies to Kuzco in the game. Whenever a guard, bug, bird, plant or other creature touches him, he loses a life. He also loses a life if he touches water or falls off platforms into the nothingness. To regain lives, there are full-life refills (large gold crowns) and one-life refills (small red crowns) that help keep the life supply up and running. In the video game, there are also purple toys which appear in different levels at various times. These are called wampies. If the player obtain a wampy, this means when all lives are lost in the crown's main five areas's, Kuzco will stop at the last checkpoint of the game, instead of the level started over again.

Kuzco Idols are red objects that help open doors. To open a door, the player must get these Kuzco-Heads, which are called red idols. The palace door has a gold Idol. Guards with red helmets carry red idols.

Also, there are potions throughout the game that help Kuzco turn into different animals to get through different obstacles. He can turn into a frog, a turtle, and a rabbit.

Yzma, Kronk, Pacha, Chaca, and Tipo, a wise man and a talking bug make appearances throughout the game. Yzma and Kronk don't want Kuzco to win, but the others give hints on how to play. When the player listens to them, they will help the player on their way to the human potion.

The game received mixed reviews, holding an aggregate score of 71% on GameRankings and 66/100 on Metacritic. Conrad rated the game a 6.5 out of 10, stating that the game "doesn't offer anything that we haven't seen before" but criticizing the game's difficulty and short length, while praising the gameplay for its variety and "spot-on" controls, and also praising its graphics and music and highlighting the game's self-aware dialogue as an enjoyable aspect. 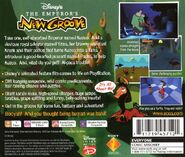 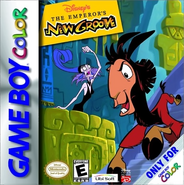 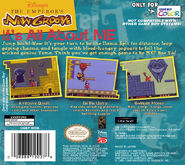