This article is about the Frozen II location. For the Once Upon a Time location of the same name, see Enchanted Forest.

The Enchanted Forest is a location in Frozen II. As its name suggests, it is a magical forest, and the home to powerful spirits of nature.

Far north from the kingdom of Arendelle, the forest is a magical environment ruled by elemental spirits of earth, water, wind, snow, and fire. The conflict between the people of Arendelle and the Northuldra resulted in a curse being placed upon the forest. All within at the time were trapped within a mist, which lasted for thirty-four years. The curse was lifted when Elsa, Anna, Kristoff, Sven and Olaf traveled there and destroyed the curse's cause - a dam built by Arendellian King Runeard, designed to drain the Northuldra people's magic. In the process, they found out that the spirits of the forest bestowed Elsa her powers to reciprocate Iduna's kindness to Agnarr, knowing that she will be the one to undo her predecessors' errors.

Elsa abdicated the throne of Arendelle to remain in the Enchanted Forest as the Snow Spirit, ceding rule to Anna, but made regular visits to Arendelle. 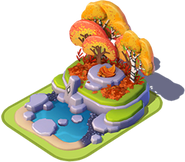 Retrieved from "https://disney.fandom.com/wiki/The_Enchanted_Forest?oldid=3906395"
Community content is available under CC-BY-SA unless otherwise noted.