The Beheaded Knight
Gus the prisoner (of the Hitchhiking Ghosts)

Deceased
The Executioner is a character from The Haunted Mansion, appearing in the graveyard in most versions of the attraction.

The Executioner is a very mysterious character, with little known about his history. It can be presumed that he was a headsman (or executioner) in Western Europe, likely during the medieval era based off of his wardrobe. It is believed that he executed a knight by beheading and by unknown means they both became ghost.

In death, the knight and the executioner became residents of the Haunted Mansion (presumably through the Ghost Relations Department). He is shown to be an an affable individual, as he harbors goodwill towards anyone, even former victims, after his death. He spends most his time in the mansion within the graveyard alongside the Beheaded Knight and Gus the Prisoner, another potential victim of his.

The Executioner is only seen in the graveyard, standing on the right-hand side of the track, next to the Prisoner and the Beheaded Knight. He sings Grim Grinning Ghosts in a high pitched voice, while the Prisoner sings in a low pitched voice.

In the WDW Haunted Mansion, his voice was re-dubbed during the 2007 Re-Haunting, and he now sings some of the lyrics differently, for instance "They begin to terrorize" instead of "They pretend to terrorize". His voice was provided by Billy Days.

The Executioner makes a cameo in the episode House Ghosts. He appears at the graveyard scaring Pete and having tea with the Hitchhiking Ghosts. However, as House of Mouse showed, he does have a bit of a mischievous and even sadistic side, grinning at Pete, who is terrified of him.

In this created storyline, the executioner was named Rocco Jones and was part of a family of opera-singers. In 1937, they put on a performance for the Gracey Family in the graveyard of Gracey Manor based on an original script called Don Juan in the Underworld. In this performance, Rocco played an executioner, his brother Giovanni played a knight, while his siblings Carmen and Antonio (the opera ghosts) played vikings.

During the performance in a mock execution scene, Master Gracey's deranged relative Gus Gracey (the prisoner) activated a trap-door beneath Rocco's feet. Due to this, Giovanni was inadvertently decapitated while Rocco was beaten to death by Gus with an iron ball & chain in the chamber below. The other siblings were murdered by Gus with a gas canister he used to create a fire.

The Executioner is a character in this game, being able to swing his axe while being played. He also appears as an NPC when the character plays as the Beheaded Knight, with the Executioner attacking the player with his axe.

The Executioner as he appears in House of Mouse 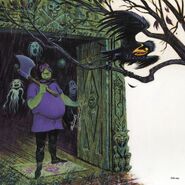