Disney Wiki
Register
Don't have an account?
Sign In
Advertisement
in: Characters, Deleted characters, Once Upon a Time characters,
and 14 more

Snow White (daughter)
The First King is a deleted minor character from Snow White and the Seven Dwarfs. He is Snow White's beloved father. When his first wife passed away, he married another maiden to give Snow White a loving mother. When he died, the Queen revealed her true nature and forced her stepdaughter to become a servant and dress in rags.

He was Snow White's father, who died when his daughter was young.

Not much is known about him except for some background information given in the Golden Books. He was a kind and good man who loved his wife dearly and since they were childless, they wished for one. One winter's day, his wife sat by a window sewing when she pricked her finger with the needle. When she saw the blood, she wished for a daughter with skin as white as snow, lips as red as blood and hair as black as ebony.

By spring, a daughter was born to the King and Queen. They called her Snow White and shortly after, the Queen died. The King was devastated and spent many sad and lonely years in his kingdom before he decided, at least for Snow White's sake, to remarry. When he did so, alas, the new Queen, although very beautiful, did not possess goodness like his first one and was vain, heartless and cruel. Instead, after his untimely death, she would start to treat Snow White like a servant.

Interestingly, in the 1987 book The Complete Story of Walt Disney's Snow White and the Seven Dwarfs, there is a mention of him being poisoned by the Evil Queen.

Although there were pictures of his first wife, there are none of him in the Golden Books. However, in 2021, with Snow White's book in the Disney Before the Story series, there are finally pictures of him.

Unlike the movie itself, the King appeared in the musical adaptation of the film. At the start of the show, the Evil Queen notices how much he loves Snow White. Rather than sharing a first dance with him, she lies to him saying she must arrange for the safety of the rest of her subjects back to her homeland in order instead. He is later seen in the second act where he is very worried about Snow White, but the Prince and huntsman tell him of the Queen's jealousy and her plans for Snow White. The King orders Luna to be brought before him and he decides to throw her in the dungeon to rot there for the rest of her days. At the end of the show, he reunites with Snow White when she marries the Prince.

In the TV series Once Upon a Time, the King's name is Leopold, a kind and generous king, and was portrayed by Richard Schiff. Along with being Snow White's father, he is the maternal grandfather of Emma Swan and the maternal great-grandfather of Henry Mills and Hope, and one of Lucy's three paternal great-great-grandfathers. Leopold only married Regina because Snow White needed a mother's care as his wife, Eva, had died when Snow White was young. He proposes to Regina and Cora accepts on her behalf. However unbeknownst to him, Regina is in love with the stable boy, Daniel, and tries to run off with him. Unfortunately, Cora, who was tipped off by Snow using her manipulation, rips Daniel's heart out and crushes it, killing him. Regina forcefully marries the King. She is unhappy with her marriage and uses her husband's new friend, the Genie, to murder him. When he dies from poisonous snakes, his wife takes over the throne and his daughter is left orphaned.

In this book, the King's name is Georg. He first marries Queen Katherine (Snow White's mother), but after her death (caused by her own sister, Ingrid), he was put under a love spell by Ingrid to marry her. She afterwards banished him from the kingdom, until he was found by Prince Henri. When he found his daughter with the dwarfs, they plotted Ingrid's demise.

Disney Before the Story

The King is seen at the Snow White's Birthday Wish book section of the Disney Before the Story book series. He tells Snow White that she can have any horse she wants for her birthday, but the only one she wants is the hurt stallion she found in the woods. 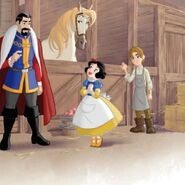 The First King as seen in Disney Before The Story

The King in Once Upon a Time