Disney Wiki
Register
Don't have an account?
Sign In
Advertisement
in: Characters, Snow White and the Seven Dwarfs characters, Deceased characters,
and 13 more

Rena Sofer and Eva Allan (Once Upon a Time)

Not much is known about her (she was not mentioned in the movie, nor were there any images of her).

However, a vintage sticker book was published by Lesieur-Cotelle & Associates S.A (R.C.B 9691). It was given to Disney enthusiast Alexandre Milazzo by a friend. It contains a Walt Disney Productions copyright and a Mir Supe is credited as editor. In it is a picture of the artist's version of her and the story, which is written in French. The scene of her sewing beside her window is reminiscent of the Grimm Brothers' story.

She can also be seen in the 1952 Snow White and the Seven Dwarfs Golden Book. In it, she sat sewing by a window one winter's day when she pricked her finger with her needle. When she saw the blood, she wished for a daughter with lips as red as blood, skin as white as snow, and hair as black as ebony. In the spring, she gives birth to a baby girl that she and her husband, the King, named Snow White. Sadly, she passes away shortly and the King, saddened and devastated over her death, eventually remarries, making Grimhilde the new Queen. And then when he passes away, she takes over the kingdom.

Aside from Snow White's hair and eye color, which she inherited from her father, she's said to look identical to her mother. The Queen's hair color varied between the sources: in the French sticker book, she was depicted as blonde, while the Belgian one as well as the Golden Book adaptation depicted her as brown.

Despite not appearing in the 1937 film, she appeared on Once Upon a Time and was played by Rena Sofer and Eva Allan as a teenager. Her character's name is Queen Eva.[1] In the TV series, she's the wife of King Leopold, the mother of Snow White, the maternal grandmother of Emma Swan and Prince Neal, the maternal great-grandmother of Henry Mills and Hope, and a paternal great-great-grandmother of Lucy. Queen Eva dies on Snow White's birthday after Cora poisons her. After her funeral, Cora explains to her that she was the one who poisoned her and she tried to make Snow White do something evil - a plan she will not abandon. It was explained that Eva and Cora knew each other when they were younger. Eva visits the kingdom of King Xavier, and she happens to notice a young Cora, who was the miller's daughter, in peasant garb delivering flour. For her own amusement, Eva sticks out her foot and trips Cora, causing her to spill the flour. She insults Eva, who is asked by King Xavier if she is alright. Eva states she is fine aside from the fact Cora has ruined her slippers. Cora is made to kneel and apologize, although the accident was not her fault.

In season three, it was revealed that Eva had been betrothed to King Leopold and Cora had tried to steal him away from her with her beauty and also after screaming for help after her former lover, Jonathan, abused and robbed her. Later on Eva reveals Cora as a harlot after overhearing a conversation with Jonathan and Cora, as Cora is pregnant and stole some jewelry from King Leopold, in order to hide her affair with the gardener. Eva marries King Leopold, while Cora is tossed out of his kingdom and gives birth to a baby girl not long afterwards, Cora abandons the baby apologizing to her, claiming she won't be her key to royalty. The baby is then sucked into a cyclone, and sent to Oz.

In Season 2, Snow White (cursed as Mary Margaret Blanchard) learns the truth of her mother's death from a sadistic Cora. After the Dark One's Dagger is surrendered to her, Cora kills Snow's old caretaker as a cruel way to show what following her mother's words gets her. This causes Snow White to seek vengeance on her former step-grandmother by killing her with the same object the latter offered her to save her mother. Snow regrets this action soon after the deed is done.

In the second half of season three, Zelena the Wicked Witch, Cora's firstborn daughter whom she had given up, wishes to rewrite her life. She intends to go back in time before Eva can expose her mother's pregnancy by killing her so she can have everything her half-sister Regina had that she was denied. This act would eradicate the existences of Snow, Emma, Henry; Eva's descendants; and Regina.

Another version of Snow White's mother. This comes from the Vintage De Beukelaer Snow White "Sticker" Book from Belgium

Version of Snow White's Mother from the Golden Book 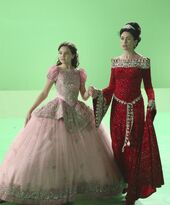