Marcy, Anne and the Plantars travel to an ancient temple that could hold the key to getting Anne and Marcy home, but only if they can survive the temple's deadly challenges!

Anne and the Plantars are enjoying the morning having chocolate pancakes, made from choco-bugs, when Sprig suddenly makes everything awkward by reminding everyone about the events two days prior. While Anne has forgiven Hop Pop about hiding the Calamity Box, they still find it difficult to discuss certain things with each other. Thankfully, this is broken up by the arrival of Marcy who announces that she has information on the first temple they must venture to to recharge the first Calamity Box gem. She explains that the temple is full of deadly traps and that no one has been able to surpass them. This actually excites Marcy, but Anne tells her that she has a habit of getting "lost in the zone" and tunes out everything else, much to her safety. Marcy brushes this aside as they arrive at the temple, via her sparrow steed, and are surprised to find what looks like an outhouse nearby the place.

Upon entering, and after Anne and Hop Pop exchange an awkward conversation, the group end up in a large cube shaped room where Anne discovers what looks like a puzzle cube. Upon holding it, the barer gets encompassed in a magnetic bubble. She gives the box to Marcy who uses it to solve the puzzle. However, whenever she messes with it, it causes the room to turn and alter, harming Anne and the Plantars. Marcy manages to solve it and the door opens up with Marcy excitedly rushing into the next room and disregarding her friends' well being. The next room has a floor of colored tiles. The group quickly learn that the pink tiles are fire traps and blue tiles are spike traps. The green tiles are safe, but there is only two of them. Marcy jumps onto one and beckons someone else to hop on the other.

Anne and Hop Pop both calmly argue with one another about who should jump on the green tile. While Hop Pop claims he should do it to redeem harming Anne, Anne feels she should do it as Hop Pop has suffered enough. Anne forcibly does so and manages to land on the tile, opening the door to the next room. Anne and Hop Pop continue arguing up until the next room which contains a chess-like game called flip wart. Marcy just so happens to be an expert at the game, but upon setting up the pieces, Polly falls through the floor and ends up as the actual flip wart piece on a bigger board. Realizing that they are to be the actual pieces, Sprig and Hop Pop are also transferred to the big board while Anne is transferred to the opposing side, much to everyone's shock. Marcy uses her skills to try and avoid harming her friends, but the game cheats and Anne ends up harming Hop Pop.

As Anne unwillingly chases Hop Pop across the board, Anne finally breaks down. She is not mad at Hop Pop anymore, but wants to have time to herself. Hop Pop understands telling her to take as much time as she needs. Realizing that she has put her friends in danger, Marcy tries to forfeit and rushes the board before using Sprig as a projectile and destroying her own piece, ending the game. Marcy believes that she has lost her chance at recharging the gem. The temple leads them out with glowing green arrows. However, the group discover that the arrows are leading them to the outhouse. It turns out that the outhouse is actually the recharging station and that Marcy learning humility was the test. Marcy places the gem on the pedestal and the green energy is recharged into it, with the green also draining from Marcy's eyes. The gem proceeds to point them in the next direction as the group plan to take a break for the time being before heading to their destination.

Back in Newtopia, General Yunan tells King Andrias that political situations are worsening, the Toad Lords plan on meeting and Grime is still on the loose. Andrias gets a message that Marcy was successful in her mission and he ominously leaves the throne room and a confused Yunan behind. He goes down a tunnel into a strange room where he informs someone that the prophecy is being undone and that "we will have our revenge". The recipient is revealed to be a large multi-eyed creature. 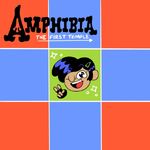 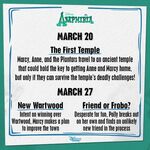