The Further Adventures of Thunderbolt

The Further Adventures of Thunderbolt

English
The Further Adventures of Thunderbolt is a 2015 animated short based on early drafts of the scene which follows the events directly from where they are seen in the animated One Hundred and One Dalmatians. It is available as a bonus feature on the film's Blu-ray release.

The short shows that Thunderbolt and Dawson are able to catch branches sticking from the side of the waterfall. Dawson is able to reach a ledge and as Thunderbolt's branch is about to snap, his human, the sheriff, is able to use his lasso to save him. The two pursue Dawson, but the thief uses explosives to cause an avalanche, blocking their path and allowing him to take some sacks of money from a wagon, which may be why Thunderbolt is chasing him. The sheriff thinks Dawson has escaped, but Thunderbolt climbs across the rock pile to continue the chase. In the end, thanks to Thunderbolt, Dawson is nabbed and brought to justice. 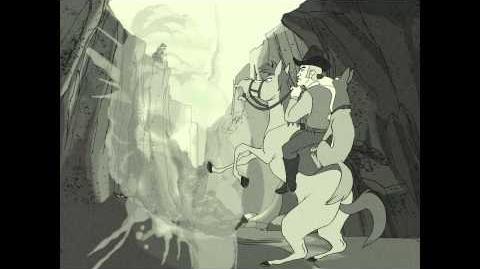