Disney Wiki
Register
Don't have an account?
Sign In
Advertisement
in: Television series by Disney, Disney Channel shows, The Ghost and Molly McGee,
and 2 more
English

Molly is an optimistic tween, who lives to make the world a better place. Scratch is a grumpy ghost, whose joy comes from spreading misery. When one of Scratch's spells backfires, he finds himself forever cursed in Molly's presence.

Bill Motz and Bob Roth had developed the series for years under the working title The Curse of Piper McGee. It originally featured the titular girl moving to Transylvania with her family where she awakens a vampire called The Count who curses her, only for Piper to joyously consider him her friend, much to his chagrin.[1] This version was pitched to Nickelodeon who passed on the project. Years later, Motz and Roth would redevelop the series and pitch it to Disney who accepted it.

Roberts said, "Our studio is bustling as we continue to bolster our development slate of projects across multiple platforms. We are delighted to embark on this journey with Bill, Bob, and Steve with The Curse of Molly McGee, one of many projects we are excited to see come to life for kids and families to enjoy. Along with the numerous projects in development from this group of incredibly talented creators, we are poised to lead Disney's TV animation legacy of inspired storytelling and beloved characters into the future."

On September 24, 2020, Bill Motz revealed that the series, originally titled The Curse of Molly McGee, was renamed to The Ghost and Molly McGee, saying that the series is about the relationship between Molly and Scratch, and thought that the new title would reflect that better.[2]

The series was originally intended for a 2020 release, but ended up being delayed until 2021 likely as a result of COVID-19.

A preview of the series aired on May 1, 2021, during the "Halfway to Halloween" event on Disney Channel. The series premiered on October 1, 2021 as part of the "Calling All the Monsters" event.

On August 31, 2021, ahead of the series premiere, Disney Channel renewed the series for a second season.[3]

Promotional art with The Curse of Molly McGee

Promotional art with original title The Curse of Molly McGee

The Ghost and Molly McGee poster 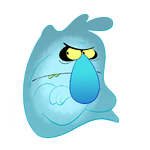 Development of The Ghost and Molly McGee 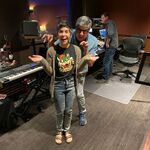 Ashly Burch and Dana Snyder in the recording studio