Disney Wiki
Register
Don't have an account?
Sign In
Advertisement
in: Characters, A Christmas Carol characters, Disney characters,
and 19 more

Torch
The Ghost of Christmas Present is the second of three spirits who haunt Ebenezer Scrooge in the live-action adaptation of Charles Dickens' novel A Christmas Carol.

Next, the ghost shows Fred and his friends playing party games after their Christmas dinner, which Scrooge earlier refused an invitation to.

Then, Scrooge and the ghost appear inside a clock tower. Scrooge points out that the spirit is now older. The ghost explains his time on earth is very brief and that it ends at midnight. 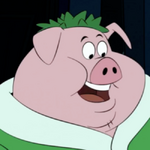