Erodes into dust when his visit is over

"Peace on Earth, goodwill to all men!"
The Ghost of Christmas Present is the second of three spirits who haunt Ebenezer Scrooge in the live-action adaptation of Charles Dickens' novel A Christmas Carol.

Then, the ghost shows Fred and his friends playing party games after their Christmas dinner, which Scrooge earlier refused an invitation to. 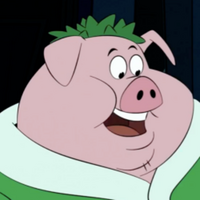