The Ghost of Christmas Future from the original novel

Spirit of the Future

Getting back at Scrooge

Disappeared
The Ghost of Christmas Yet to Come, also known as the Ghost of Christmas Future or Ghost of the Future, is a major character in the live-action adaptation of Charles Dickens' novel A Christmas Carol. It appears to Ebenezer Scrooge to predict what happens to life in the future if he stays the way he is.

Occasionally, the Ghost of Christmas Yet to Come rides a Phantom Hearse and chases Scrooge throughout London on it. One chase sequence sees Scrooge shrunk to the size of a rat after the ghost cracks his whip, creating a shockwave in doing so.

The Ghost is the final spirit and shows Scrooge a vision of his unmourned death in the near future, as well as the death of Tiny Tim. In this movie, the Ghost of Christmas Yet to Come is a large, faceless wraith.

The specter scares Charles Dickens and Rizzo; they exit the movie and don't appear again until after the Ghost is gone.

A version of the Ghost of Christmas Future appears in the 2017 reboot of DuckTales in the episode "Last Christmas!". He is mostly silent with just a few occasional grunts and resembles a carcass more than a skeleton.

He, along with the Ghosts of Christmas Past and Future visit Scrooge McDuck every year just to hang out after accidentally visiting him instead of Ebenezer Scrooge. The group takes Scrooge to his first Christmas party held at McDuck Manor where Future ends up dancing with Bentina Beakley who seems to legitimately like him.

He later attends Scrooge McDuck's Christmas party back in the present where Beakley remembers her time dancing with him, causing him to blush. 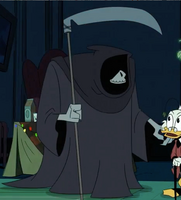 Retrieved from "https://disney.fandom.com/wiki/The_Ghost_of_Christmas_Yet_to_Come?oldid=4510369"
Community content is available under CC-BY-SA unless otherwise noted.