"The Goofy Success Story" is an episode of Disneyland. It aired on December 7, 1955.

Goofy's rise to stardom is featured here, starting with a look at Hollywood, where talent scouts seek out the next superstar. They find Goofy (birth name Dippy Dog) in a movie theater watching a Mickey Mouse cartoon and laughing at it, and he is "discovered". And so begins the career of an actor with a unique laugh. They change his birth name Dippy Dog to his stage name Goofy.

Soon, Goofy becomes one of the most popular stars in Hollywood, but his optimism turns to depression during an award show in which he doesn't receive a single award. Goofy contemplates walking down into the sea to end his misery, but he receives a telegram from the studio saying that he's being offered a double role in a new film about driver safety. At the end, Goofy receives a safety award for his film.

Goofy being carried out of the theater by talent scouts.

Goofy sets off to film How to Ride a Horse

Goofy is distraught with a sad look on his face from not receiving a single award.

Goofy admits to the audience that he wouldn't really drive like Mr. Wheeler in real life. 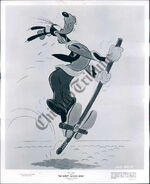 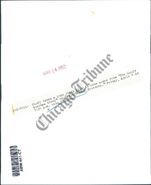 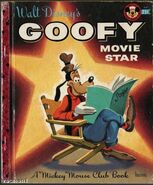 The "Goofy, Movie Star" book coincided with the release of this show 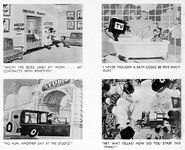 Add a photo to this gallery
Retrieved from "https://disney.fandom.com/wiki/The_Goofy_Success_Story?oldid=4070799"
Community content is available under CC-BY-SA unless otherwise noted.