The Grasshopper and the Ants

The Grasshopper and the Ants

Funny Little Bunnies
The Grasshopper and the Ants is a Silly Symphony cartoon released on February 10, 1934. It is based on the classic fable The Ant and the Grasshopper.

The grasshopper is playing his fiddle, dancing and eating leaves. He notices some ants working hard collecting food. He laughs and calls an ant to him. He tells the ant that there is food on every tree and he sees no reason to work. He dances and sings that The world owes us a living. The ant begins to dance too. The queen ant arrives, carried in a sedan chair, and sees the ant playing instead of working. The ant notices the queen and immediately goes back to work. The angry queen warns the grasshopper that he will change his tune when winter comes. The grasshopper blithely dismisses the queen's warning, saying that winter is a long way off.

Autumn passes and winter arrives. The grasshopper trudges through the snow, cold and hungry. He finds one withered leaf, but it blows away before he can eat it. Meanwhile, the ants are feasting on their stored food. The grasshopper knocks on their door and collapses. The ants carry him inside and warm and feed him. The queen ant approaches him. He begs to be allowed to stay. She tells him that only those who work may stay, and tells him to take his fiddle. Thinking that he is being dismissed, he starts to leave, but the queen tells him to play the fiddle. While the ants dance, he happily plays and sings I owe the world a living!

Sheet music cover for "The World Owes Me a Living". 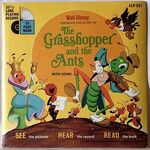 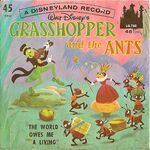 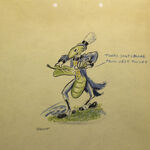