Oliver & Company
The Great Mouse Detective is a 1986 animated film produced by Walt Disney Feature Animation, originally released to theaters on July 2, 1986 by Buena Vista Distribution. The 26th animated feature in the Disney Animated Canon, it was directed by Burny Mattinson, David Michener, and the team of John Musker and Ron Clements, who later directed Disney's hit films: The Little Mermaid and Aladdin. It was also known as The Adventures of the Great Mouse Detective for its 1992 theatrical re-release and Basil the Great Mouse Detective in some countries. The main characters are all mice and rats living in Victorian London.

Based on the children's book series Basil of Baker Street by Eve Titus, the film draws heavily on the tradition of Sherlock Holmes with a heroic mouse who consciously emulates the detective; Titus named the main character after Basil Rathbone, who is best remembered for playing Holmes in film (and whose voice, sampled from the Red-Headed League was the voice of Holmes in this film, 19 years after his death). Interestingly, Holmes also mentions "Basil" as one of his aliases in the Arthur Conan Doyle story "The Adventure of Black Peter".

After the failure of the previous Disney animated feature film, The Black Cauldron, although it was not a smashing hit, this film proved to be a major success upon its initial release in 1986, both critically and financially. As such, the new senior management of the company were convinced that their animation department was still a viable enterprise and this set the stage for the Disney Renaissance. It should be also noted that it's the one which saved Disney's Animation Studios from going bankrupt at the time,[1][2] similar to what Cinderella and One Hundred and One Dalmatians did.

Despite not being well known upon its original release, in recent years, the film has been regarded as a cult classic.[3]

In London 1897, a young Scottish-Welsh mouse named Olivia Flaversham is celebrating her birthday with her toymaker father, Mr. Flaversham who gifts her with a beautiful ballerina doll. Suddenly, a bat named Fidget, who has a crippled wing and a peg leg, bursts into the Flavershams' workshop, and after a short struggle disappears with Flaversham. A frightened Olivia comes out of hiding and calls out into the night for him.

Olivia searches to find Basil of Baker Street, a world-famous detective. Dr. David Q. Dawson, who has returned from military service, stumbles upon Olivia and helps her find Basil's residence. At first Basil is reluctant (because at first he thinks that she is lost), but when Olivia mentions the peg-legged bat that kidnapped her father, Basil reveals that the bat's name is Fidget and is a minion of the evil Professor Ratigan, an evil genius whom Basil has been trying to capture for years. As it turns out, Ratigan has kidnapped Flaversham to create a clockwork robot which mimics the Queen of the Mice so Ratigan can rule England. Flaversham initially refuses to participate in Ratigan's scheme, whereupon Ratigan orders Fidget to capture Olivia. If Flaversham refuses to comply, Ratigan will feed Olivia to his pet cat, Felicia (he breaks the ballet doll by squeezing it for emphasis). Ratigan and his minions celebrate his new plan, but unfortunately one of his minions, Bartholomew, accidentally (albeit drunkenly) calls Ratigan a rat and is promptly eaten by Felicia, and Ratigan demands they continue singing.

Basil and Dawson then use Sherlock Holmes' pet, a Basset Hound named Toby, to track Fidget's scent to a nearby toy store. Fidget is surprised by Basil, Dawson, and Olivia in the toyshop where he is stealing clockwork mechanisms and toy soldiers' uniforms for Ratigan's plan. He hides and later traps Olivia by ambushing her from inside a toy cradle. Basil and Dawson pursue Fidget but become entangled in some toys and fall behind, giving Fidget enough time to escape with all the materials he needs and Olivia.

While upset with Dawson for not watching Olivia, Basil is certain they'll find her. As they are searching the shop, Dawson discovers Fidget's forgotten checklist, which details everything Fidget has taken with him. Ratigan brings Olivia to her father, but their reunion is short-lived as Ratigan orders Flaversham to finish the robot, or harm will come to Olivia. When Fidget finds the list missing, he tells the Professor that Basil followed him. The Professor angrily feeds Fidget to his cat, but after realizing that Basil will be coming for Olivia, he plans to trap Basil with a lure. Back at Baker Street, Basil discovers through close examination and some chemical tests that the list came from a riverfront, and he and Dawson look for a small tavern near the Thames where the sewer would connect to the river. Basil and Dawson disguise themselves as sailors and enter the tavern, inquiring for Ratigan. As they wait, Fidget enters the pub. They follow Fidget through some pipes to Ratigan's headquarters, only to discover that Ratigan and his henchmen had prepared for their arrival. Triumphant, Ratigan ties them to a spring-loaded mousetrap, connected with a Rube Goldberg machine constituting a gun, a crossbow, an axe, and an anvil with a record being the timer stated by Ratigan that when the song ends, the trap starts. Ratigan sets out for Buckingham Palace, where Fidget and his accomplices defeat Royal Guard and kidnap the Queen. Basil briefly despairs at being outwitted but snaps out of it just in time to deduce the trap's weakness and escape.

Back at Buckingham Palace, Ratigan forces Flaversham to operate the toy Queen while his men pose as Royal Guards, and the real Queen is taken by Fidget to be fed to Felicia. The fake Queen declares Ratigan ruler of all Mousedom, and, after thanking his robotic consort, he announces his tyrannical plans for his new "subjects", including several unfair taxes. Just then, Basil, Dawson, and Olivia save Flaversham and the real Queen and apprehend Fidget along with Ratigan's other two henchmen (Bill Lizard and one mouse). Basil then seizes control of the mechanical mouse-queen, forcing it to denounce Ratigan as an impostor and tyrant, all while breaking into pieces. The crowd, enraged by Ratigan's treason, start climbing onto him and defeating his shanty guards. Ratigan frees himself and escapes on his dirigible with Fidget, and holds Olivia hostage.

Basil, Dawson, and Flaversham create their own craft with a matchbox and some small helium-filled balloons, held under the Union Jack. A high-speed chase above the city ensues. Ratigan throws Fidget (who can't fly) into the Thames River below to "lighten the load", and then attempts to drive the dirigible himself. Basil jumps on to the dirigible to confront his nemesis; however, without a helmsman, Ratigan is unable to steer the craft, and ends up crashing straight into Big Ben. Inside the clock, Ratigan and Basil face off in a final battle. Basil manages to gets Ratigan’s coat tangled in the clocks gears. Seeing Basil escaping, Ratigan completely loses his mind and goes insane. Basil rescues Olivia and safely delivers her to Flaversham, who is still on the balloon with Dawson. He plunges into Basil, and they both fall onto the clock's hour hand. The fight ensues, and Ratigan begins to viciously thrash Basil. It seems as if Basil's luck is about to run out until the bell tolls and Ratigan plunges off the hand taking Basil with him. However, while Ratigan fell to his presumed death, Basil saves himself just in time with the motor of Ratigan's destroyed dirigible.

Back at Baker Street, Basil and Dawson recount their adventures as well as the queen's gratitude for their saving her life, and afterward, the Flavershams leave. Dawson figures it's time for him to leave as well, but the scene is interrupted by a distraught new client. Basil then persuades Dawson to remain as "my trusty associate, Doctor Dawson, with whom I do all my cases".

The layouts were done on computers, and the use of video cameras made a digital version of pencil testing possible. The movie was also notable for its early use of computer generated imagery (CGI) for a chase scene that takes place in the interior of Big Ben. The movements of its gears were produced as wire-frame graphics on a computer, printed out and traced onto animation cels where colors and the characters were added. The film is sometimes cited as the first animated one from Walt Disney Pictures to use CGI; in reality, The Black Cauldron has this distinction.

Olivia was originally intended to be an older character with the potential as a love interest for Basil or even an infatuated Dr. Dawson, before it was decided that she should be a child to better gain audience sympathy. While Basil and Dawson were visually based on Rathbone and Bruce, their voices and personalities were not. Basil's voice was based on Leslie Howard’s portrayal of Henry Higgins in the film Pygmalion while Dawson's voice was based on Disney animation legend Eric Larson. "We didn’t want to make them simply miniature versions of Basil Rathbone and Nigel Bruce," Clements affirmed. "Dawson’s not a buffoon. He’s a foil for Basil but also a warm and caring person."

Disney's decision to name the film The Great Mouse Detective and not Basil of Baker Street was unpopular with the filmmakers. Animator Ed Gombert wrote a satirical interoffice memo, allegedly by studio executive Peter Schneider, which gave the preceding films the following generic titles:

The memo later inspired a category on Jeopardy!.

The film was well received by critics during its initial release, including a "two thumbs up" rating from American film critics Gene Siskel and Roger Ebert.

London's Time Out magazine wrote, "As usual with film noir [...] it is the villain who steals the heart and one is rooting for in the breathtaking showdown high up in the cogs and ratchets of Big Ben."

The film also maintains an 81% "Fresh" rating on Rotten Tomatoes, based on 16 reviews.

Although it was not a big financial hit as it was outperformed by Don Bluth's An American Tail, this film remained quite successful enough at the box office, garnering at almost over $38,625,550 at over a budget of $14 million during its initial release. Its inexpensive success after its predecessor's failure gave the new management of Disney confidence in the viability of their animation department. It should be noted that its performance at the foreign box office was not documented as with most movies from the Disney Dark Age.

Despite its critical and financial success at the box office, the film was not released on home video until after its theatrical re-release in 1992; this first home video release of it eventually became part of the Walt Disney Classics series. In August 1999, it was reissued on VHS with a game sheet inside it as part of a contest. It was later released for the first time ever on DVD in 2002, with a short making-of feature on how the film was made.

A new "Mystery in the Mist Edition" of The Great Mouse Detective was released on DVD on April 13, 2010 and on Blu-ray Disc on October 9, 2012. Unlike previous home video releases, which all used the 1992 reissue title print (The Adventures of the Great Mouse Detective), this DVD restored the original 1986 title card, which had previously not been seen since the original 1986 release. It also has the film in 1.78:1 aspect ratio Widescreen revealing more picture, bringing it closer to its original theatrical aspect ratio. This version of the film is also used for the Disney+ streaming service. 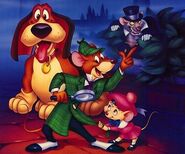 Artwork of Toby, Basil, Olivia, and Ratigan, used for the film's 1992 video release

A cameo of Dumbo