Still Standing
The Grid is a vast computer system created by Kevin Flynn, appearing as the main setting in the 2010 Disney film, Tron: Legacy and its 1982 prequel, TRON.

The Grid is a vast part of the Tron system, programmed by Kevin Flynn. Often referred to by Flynn as his "digital frontier", the Grid was made to provide an experimental platform where all forms of research could be carried out at unparalleled speeds. Perceived time on the Grid is measured in cycles and run at a pace far greater than time perceived in the real world, thus allowing anyone immersed in the computer environment to perform the same functions in a fraction of the time it would take them otherwise. Much of the Grid consists of a flat, dark platform with glowing blue, cyan, or white ribbons of light covering it in a vast latticework. Within the Grid itself lies Tron City, a metropolis modeled on a real world city, which plays host to a diverse range of programs. The programs in turn carry out all the day-to-day running of the system. On the periphery of the Grid lies the Outlands, an inhospitable region where most programs never venture.

The Grid appears in Kingdom Hearts 3D: Dream Drop Distance as a continuation of the previous world Space Paranoids and to the Tron storyline. In this incarnation, it was a part of Space Paranoids that never awakened after it was freed from the Realm of Darkness.

When Sora comes to in this world and, he briefly fights Rinzler before meeting Kevin Flynn, his son Sam, and Quorra, who is fascinated by Sora's Keyblade. Flynn tells him that the figure that Sora encountered was Tron, reprogrammed by CLU to serve him. Sora offers to restore Tron, and Quorra agrees to take him to the Rectifier. Quorra is soon kidnapped by Rinzler, forcing Sora to follow him and rescue her. After catching up to CLU and Rinzler, Sora defeats Rinzler and reprograms him, but CLU appears and attempts to take out Sora with his Disc. Rinzler manages to push Sora aside and deflect the hit, but the ricochet takes out the floor beneath him, causing him to fall below the stadium, failing to reach Sora's outstretched hand. Sora is saddened from failing to save his friend, but Quorra comforts him. Shortly after, Sora finds the Grid's Keyhole and unlocks it.

Meanwhile, Riku, upon entering the Grid, allows himself to be captured by the guards in order to learn more about the world. He is transported on a Recognizer along with Sam Flynn, who tells him where he is. Riku brought to the Light Cycle track, where CLU pits him against several Black Guards on light cycles, but Riku escapes the track by blasting a hole in a wall. He meets up with Sam and the two of them head for the Portal leading to the real world, where Sam plans to delete CLU. Riku later catches up with Sam, Kevin, and a catatonic Quorra. On the Solar Sailer, CLU's forces located them but Quorra gets herself captured to give the others a chance to reach the Portal. Sam and Riku head off to CLU's Throneship to recover Flynn's Identity Disc and rescue Quorra. Although they recover the disc, Rinzler arrives with Quorra in custody. Riku knocks him off the ship with a Wall Kick. They take Quorra and join Flynn on a glider. At the portal, they encounter CLU, who summons the Commantis for Riku to fight. As this occurs, Flynn tricks CLU into taking his disc (which he had actually switched with Quorra's) while Sam and Quorra head for the Portal. To prevent CLU from getting to them, Flynn absorbs CLU, disappearing in the process. The Portal closes with Sam and Quorra on the other side, and the Keyhole appears for Riku to unlock.

High view of The Grid

The Grid in Tron: Uprising 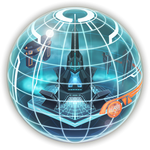