The Happiest Millionaire is a 1967 musical film, based upon the true story of Philadelphia millionaire Anthony J. Drexel Biddle. It received an Academy Award nomination for Costume Design by Bill Thomas. The musical song score is by Robert B. Sherman and Richard M. Sherman. It is by A.J. Carothers based on the play that was based on the book My Philadelphia Father by Cordelia Drexel Biddle. It was the last live-action musical comedy film produced by Walt Disney, who sadly died during its production.

The story begins in autumn 1916, and follows an Irish immigrant named John Lawless (Tommy Steele) as he applies for a butler position with eccentric Philadelphia millionaire Anthony Biddle (Fred MacMurray). Even though the family is a bit strange, he soon learns that he fits right in. Anthony takes a liking to him immediately. For the rest of the film, he serves as the narrator/commentator.

Anthony busies himself with his Biddle Boxing and Bible School (located in his stable) and with his 12 pet alligators in the conservatory. He is also anxious to get America into the War in Europe (World War I), despite the Governments Policy of Neutrality. His wife, Cordelia (Greer Garson), stands quietly by, accepting his eccentricities with a sense of pride and class. Their sons, Tony and Liv (Paul Petersen and Eddie Hodges, respectively) are headed off to boarding school, never to be seen in the film again. Their daughter, Cordy (Lesley Ann Warren in her film debut), is a tomboy with a mean right hook who was educated by private tutors and has had limited contact with conventional society. She's frustrated by her apparent inability to attract suitors and wants to see what's beyond the Biddle manor.

Anthony reluctantly lets Cordy go to a boarding school as well (after some prodding from both her and from his Aunt Mary (Gladys Cooper), where her roommate teaches her how to lure men with feminine wiles, known as "Bye-Yum Pum Pum". At a social dance hosted by her aunt and uncle, she meets Angie Buchanan Duke (John Davidson in his film debut) and they fall in love. He tells her that he is fascinated with the new automobile and wants to head to Detroit, Michigan to make his fortune there, instead of taking over his family's tobacco business.

That winter, Cordy comes back home and tells them that she is engaged. At first, this is a difficult thing for Anthony to take. He does not want to give her up. But, after meeting Angie and witnessing first-hand his Jiu Jitsu fighting skills, he takes a liking to him and accepts the engagement. Then Cordy travels with him to New York City to meet his mother (Geraldine Page). Soon both families are making arrangements for a very grand wedding.

Constant condescending comments from Angie's mother are painful for Cordy. To make matters worse, their families' elaborate planning for the "social event of the season" (it is by now spring 1917), makes both Cordy and Angie feel pushed aside. The tension reaches a climax when she learns that he has abandoned his plans for Detroit, and is instead taking his place in the family business, following his mother's wishes. She angrily calls the wedding off, thinking of him as a mama's boy, and he storms out of the house. Both families are instantly in a tremendous state of upheaval. Anthony sends John to look after Angie.

John finds Angie at the local tavern, contemplating what he will do next. During a rousing song-and-dance sequence, John tries to convince him to go back to Cordy. However, he is stubborn and thinks of other ways to deal with his problems, among other things saying that he wants to join the Foreign Legion. He unwittingly starts a bar fight (with a little help from John) and is hauled off to jail.

The next morning, Anthony comes to bail Angie out. He tells him he has to forget about his own dreams and accept his place in the family business. His words have the desired effect, inspiring Angie to defy his mother and elope with Cordy and go to Detroit. She, however, believes Anthony talked him into it, so to prove his sincerity, amid the cheering of the cell mates, he throws her over his shoulder and carries her out of the jail house to start their new life together (Short version ends here). After Anthony and Cordelia return home a delegation of Marines arrive to inform him he has been made an "provisional captain" in the Marine Corps; and is wanted immediately to go to Parris Island to help/continue training the recruits, now that America is finally entering the war. He accepts with delight, and the hearty congratulations of his suddenly appearing Bible Boxing Class. Behind the closing credits a car is seen driving toward a city skyline (apparently Detroit) dominated by factories spewing smoke to blacken the sky over the city. 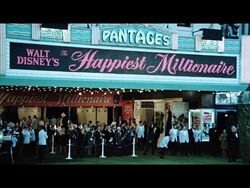