The Happy Ride with Baymax

The Happy Ride with Baymax
ベイマックスのハッピーライド

The Happy Ride with Baymax[1] is a Big Hero 6-themed whip ride at Tokyo Disneyland, and is equipped with Disney's Fastpass.[2]

It was originally scheduled to open on April 15, 2020,[3] but the opening was postponed indefinitely following the closure of the park due to the coronavirus pandemic. In mid-September 2020, the attraction was confirmed to be opening on September 28, 2020.[4] The ride soft-opened a week earlier on September 21, 2020[5], along with Enchanted Tale of Beauty and the Beast, and officially opened 7 days later.

The lovable robot Baymax invites guests to join one of 22 personal healthcare companion robots for an exciting musical "whip ride" that swings them unpredictably round and round to bring their joy levels up to ten. Six original songs were composed for the attraction, with a soundtrack release set for November of 2020.[6]

Around the attraction complex are a set of armored maneki-neko Baymax shaped vending machines (a partnership between the San Fransokyo Institute of Technology and the Lucky Cat Café) where a napping figure of Mochi can be seen dozing on the roof. 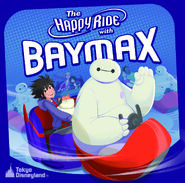