Disney Wiki
Register
Don't have an account?
Sign In
Advertisement
in: Films, The Haunted Mansion, 2003 films,
and 3 more

$90 million
The Haunted Mansion is a film based on the attraction of the same name that was released on November 26, 2003. It stars Eddie Murphy, Terence Stamp, Jennifer Tilly, Wallace Shawn, Marsha Thomason, and Nathaniel Parker.

Jim Evers is a workaholic real estate agent who has little time for his family, wife, Sara, teenager daughter, Megan, and 10-year-old son, Michael, who has arachnophobia. After missing his own wedding anniversary to seal a business deal, he promises his family to go on a weekend away to a nearby lake. Sara is contacted by the occupants of the Gracey Manor, located in the bayou swamps of New Orleans, and an eager Jim drags them along to do business there.

They meet Master Edward Gracey, his stern butler Ramsley, and other staff Emma and Ezra. Master Gracey invites the family to stay the night when a rainstorm floods the nearby river. When Jim is taken to the library by Ramsley, he becomes trapped in a secret passageway. Michael and Megan encounter a "ghost ball" which leads them to the mansion's attic where they find a portrait of a woman resembling Sara. Sara meets Master Gracey who explains that his ancestor's lover Elizabeth Henshaw seemingly committed suicide via poison, and his ancestor followed suit via hanging.

However, Jim encounters gypsy woman Madame Leota, whose head is encased in a crystal ball. After briefly being scared away, Jim and his children learn that all of the mansion's residents are actually ghosts, cursed to be trapped in the mansion until Master Gracey and Elizabeth's ghosts are reunited, and Master Gracey believes that Sara is his lover reincarnated. In order to break the curse, Madame Leota sends the Evers family, minus Sara, into the mansion's cemetery and to a mausoleum to fetch a key.

Jim and Megan locate the key but awaken all of the mausoleum's undead inhabitants. Thankfully, they escape unharmed, Michael rescuing them and overcoming his fear of spiders. Madame Leota points the Evers to a trunk in the attic, Jim finding an old letter from Elizabeth to Master Gracey with the promise of marriage, revealing that her suicide was false. Ramsley appears and reveals that he murdered Elizabeth to prevent Master Gracey from abandoning his home and heritage. To hide the truth, he traps the children in a trunk and literally throws Jim out of the mansion.

Master Gracey reveals to Sara his ghostly self, and obsessively believes she is Elizabeth. Ramsley approaches Sara and blackmails her into marrying Master Gracey for the sake of her children. During the wedding ceremony, Ramsley poisons Sara's drink with iocane powder so that she will die and return as a ghost and end the curse. Madame Leota gives Jim the confidence to ram his car into the house, save his children and confront the ghosts. He gives the letter to Master Gracey, revealing him the truth about Elizabeth's death, and Master Gracey confronts Ramsley for murdering her.

An enraged Ramsley summons wraiths to kill the group, but a fiery dragon emerges from the fireplace and drags Ramsley into the mouth of the Burning Hells for his actions. Ramsley seizes Jim and attempts to pull him down with him to Hell for ruining his plans, but then Master Gracey rescues Jim while Ramsley is dragged into the Burning Hells forever. Sara succumbs to the poison, but the ghost ball arrives and possesses her body, revealing itself to be Elizabeth's ghost. Elizabeth and Master Gracey kiss, and Sara is revived. In gratitude and seeking redemption, Master Gracey gives the Evers the deed to the mansion, allowing them to do what they want with it as long as they remain happy. The ghosts all depart the mansion and move on to Heaven.

The film ends with the Evers driving off to the lake, accompanied by Madame Leota and four singing busts who end the film with their own rendition of "When the Saints Go Marching In". After the closing credits, Madame Leota bids farewell to the audience and invites them to join the dead. 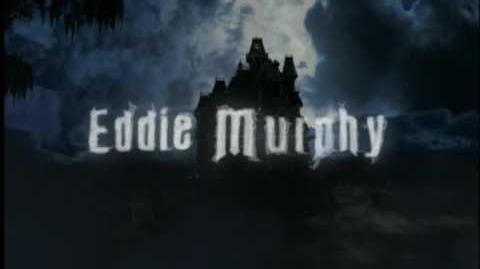 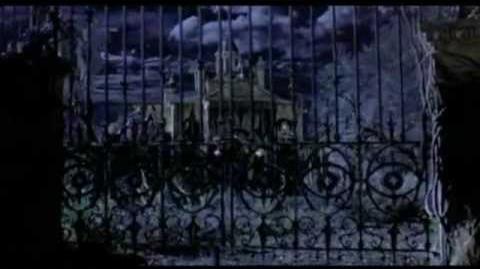 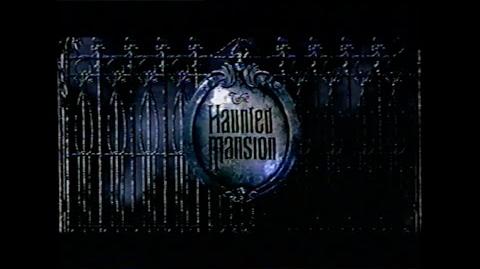 The Disney Wiki has a collection of images and media related to The Haunted Mansion (film).

A reboot had been in the planning stages since 2010 with Guillermo del Toro attached. Numerous delays and rewrites resulted in del Toro dropping out until 2021 when Justin Simien signed on to direct.