Action
Adventure
Horror
The Haunted Mansion is an American action-adventure video game released by High Voltage Software in 2003. Despite its release date, the game does not relate to the 2003 film.

A Renaissance influenced 19th century mansion located in a bayou nearby New Orleans was a happy home to a family (presumably the Gracey family) until Atticus Thorn, leader of an evil cult known as the Order of Shadows, terrorized the mansion, causing the family to abandon the home. Thorn corrupted many of the resident ghosts of the mansion, transforming others into evil spirits to serve his will.

On October 17, 1879, a young man named Ezekiel "Zeke" Holloway is searching for a job, when he is misled by a newspaper advertisement about being a caretaker for the mansion. Making the decision to take the job, he journeys to the mansion, only to faint upon arrival when he is greeted by six friendly ghosts, who are Atticus Thorn's slaves. Awakening, a spirit in a crystal ball named Madame Leota informs him that Thorn has trapped 999 souls in the mansion as part of his attempt to take over the Afterlife and should be sent into the Depths of the Afterdeath. She also informs him on how to use the Beacon of Souls, a magic lantern that fires bolts of light to fight off evil spirits. Leota also says that the Beacon is used to destroy the evil for good.

Taking up the Beacon, Zeke travels throughout the manor's rooms, using Leota's clues to dispel the evil magic. Along the way, he frees the hidden shriveled spirits and collects the sacred Soul Gems that power the Beacon, all the while having to overcome the fearsome enemies that only seek to bar the way. After battling through numerous enemies, Zeke eventually gains a pirate's ring that unlocks a passageway to Thorn's secret lair — the Vault of Shadows. Inside the Vault, Thorn reveals his plot to take over the Land of the Living and the Realm of the Dead. Thorn steals the Beacon and, after absorbing the energy from the captured souls, transforms into a gigantic worm-like monstrosity, intent on destroying Zeke and Leota.

After Thorn's defeat, Zeke emerges victorious and is thanked by the friendly ghosts. The Haunted Mansion is finally returned to light, and the 999 spirits are set free and move on to the Heavens. Zeke is employed as caretaker of the estate, and continues to live in harmony with the remaining ghosts along with Madame Leota. He then pursues his dream as a writer under Leota's guidance later on. 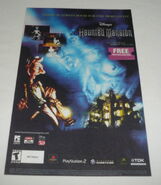 This video game article is a stub. You can help Disney Wiki by expanding it.
Community content is available under CC-BY-SA unless otherwise noted.
Advertisement