Disney Wiki
Register
Don't have an account?
Sign In
Advertisement
in: Article of the week, Characters, Villains,
and 27 more
English

The Adventures of Ichabod and Mr. Toad
Mickey's House of Villains
Once Upon a Halloween

The Cat That Looked at a King

The Headless Horseman from the novel Sleepy Hollow by Washington Irving

The Headless Man
The Ghost
The Galloping Hessian
The Goblin

Cutting the heads of whoever passes through the woods at night

The town's bridge (as it disables his powers)

Horse
The Headless Horseman is the main antagonist of The Legend of Sleepy Hollow, the second half of Disney's 1949 animated feature film the Adventures of Ichabod and Mr. Toad.

The Legend of Sleepy Hollow

Brom Bones tells Ichabod Crane the story of the Headless Horseman, who is the ghost of a Hessian soldier who lost his head to a stray cannonball long ago during the Revolutionary War. Every Halloween night he rides in Sleepy Hollow looking for his head. If he can't find it, he'll take other people's heads to replace it. The best way to escape him is to cross the bridge near the church, as the Horseman's dark powers are limited only to the woods.

That very night, Ichabod rides home alone on Gunpowder and keeps imagining that he is being followed. When he finds that it's only cattails bumping on a log, Ichabod and Gunpowder hysterically laugh, but suddenly stop as another, more sinister laugh joins them. They both slowly turn around to find the Headless Horseman about to attack them, sword at the ready. He gives chase, laughing all the while. When Ichabod momentarily is trapped on the Horseman's own black steed, he looks down the Horseman's neck to find nothing but evil hollow laughter. Ichabod runs for the bridge and barely manages to make it across. As Ichabod turns around, he screams as the black horse rears up and the Headless Horseman throws a flaming jack o' lantern right at him. Ichabod tries to dodge the horrible missile, but too late. He gets struck in the head and tumbles off Gunpowder into the dust.

The very next morning, Ichabod's hat is found next to a shattered pumpkin. However, Ichabod has vanished since Brom and Kantrina are married. Rumors about Ichabod still alive and married to a wealthy widow in a distant county are all but dismissed, as the good townsfolk of Sleepy Hollow know that he must have been spirited away (or most likely killed) by the Headless Horseman himself.

The Headless Horseman makes a very brief cameo in the Darkwing Duck episode "Monsters R Us", in which he appears from behind a closed door inside the home of Morgana Macawber. When Darkwing pays Morgana a surprise visit and finds find her house to be empty, he looks around for her before opening one of her doors to reveal the Horseman surrounded by a fire. Angered, the Horseman rides forward and tramples over Darkwing in his path, leaving horseshoe marks all over the poor hero's body.

In "Rent Day", the Horseman is one of many guests Mickey Mouse attempts to make a trade with in order for Mickey to get the fifty dollars he needs to pay the rent for the nightclub. When bargaining with the Horseman, Mickey offers to get him a pumpkin as a new head if the Horseman would give his sword to Mickey. Ultimately, however, Mickey is unable to fulfill any of his trades, so the Horseman got to keep his sword.

When Pete takes over the nightclub in "Pete's House of Villains", the Horseman takes over Clarabelle Cow's duty of hosting the Main Street Gossip segment, which leaves many of the guests unsatisfied since the Horseman lacks a head with which to speak any gossip at all.

The Cat That Looked at a King

The Headless Horseman is briefly mentioned by the King, who says he once displeased him, and subsequently "lost his head", implying that the Horseman was beheaded on order of the King.

The Headless Horseman makes a cameo in the special "The Scariest Story Ever: A Mickey Mouse Halloween Spooktacular", where while trick-or-treating, Goofy sees him take the place of a statue and give his iconic laugh, much to his horror.

In Carl Barks' Donald Duck story The Golden Helmet, one of the items shown in the Duckburg Museum is "the Headless Horseman's toupee".

The Headless Horseman is part of various Halloween festivities at Walt Disney World, leading the Boo to You Parade at Mickey's Not So Scary Halloween Party and being the center of a Sleepy Hollow themed haunted hayride at Fort Wilderness.

At Hong Kong Disneyland, the Headless Horseman was the host of the 2011 Halloween festivities. He leads the Halloween parade and starred in a new haunted maze in Adventureland, The Revenge of the Headless Horseman. Here, a member of an Adventurers Club has claimed to have found his head and is presenting it in a sideshow exhibit, provoking the Horseman's wrath. This attraction proved popular enough to become a recurring feature of the event.

The Headless Horseman made his debut as part of Mickey's Halloween Party at Disneyland in 2016, leading the Frightfully Fun Parade. A statue of the Horseman has also become a central feature of Disney California Adventure's Halloween festivities on Buena Vista Street.

In World of Color: Villainous!, the Headless Horseman is the last villain to appear in the villain montage (as well as the last one to be introduced in the Halloween special). As the Queen of Hearts shouts "Off with their heads!", the Horseman appears laughing maniacally wielding his sword and pumpkin head, which he throws at the audience causing a fiery explosion with actual flame streams rising up.

The Horseman also has a spell card known as "The Headless Horseman's Exploding Jack-O-Lantern" in the attraction Sorcerers of the Magic Kingdom.

The Headless Horseman as he appears in the book and at the end of the movie. 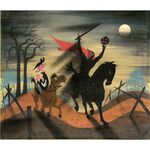 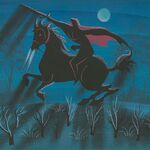 The Headless Horseman about to throw his Jack 'O Lantern at Ichabod.

The Headless Horseman's Sorcerers of the Magic Kingdom spell card.

The Headless Horseman vs the Scarecrow from a cancelled Disney Adventures story.

Headless Horseman from the WDCC. 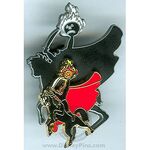 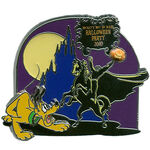 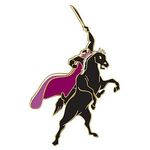 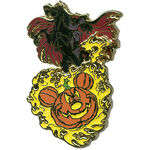 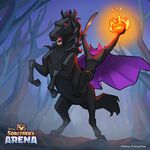