Disney Wiki
Register
Don't have an account?
Sign In
Advertisement
in: Locations, The Twilight Zone Tower of Terror, Hotels,
and 2 more

The Tower of Terror

“Hollywood, 1939, amid the glitz and glitter of a bustling young movie town at the height of its golden age, the Hollywood Tower Hotel was a star in its own right; a beacon for the show business elite.”
―Narrator (The Twilight Zone)

The Hollywood Tower Hotel is the name of the building that serves as the location of The Twilight Zone Tower of Terrorattraction. It is a fictional hotel located in Los Angeles, CA, just toward the end of Sunset Blvd.

The Hollywood Tower Hotel opened in 1917 and soon rose to popularity amongst celebrities and the social elite for its luxurious accommodations and fantastic service. The hotel had hosted several parties at the "Tip Top Club" on the 13th floor (although it would never be listed as such as hotels exclude the number 13 from room listings due to superstition).

On the Halloween night of 1939 at 8:05 PM, five people stepped aboard the elevator only for the elevator to be struck by bolts of paranormal lightning. This caused the elevators to fall and shafts to vanish, leaving only singed burning on the side of the tower with the five people inside being gone. After this, an investigation was launched and the hotel would be shut down immediately. The hotel was left in darkness and decay for fifty-five years, during which time the hotel earned a reputation for being haunted and a monument of terror that loomed over Hollywood.

In the July of 1994, the hotel would be reopened but it wasn't the same. The hotel seemed to be frozen in time as clocks didn't work and outside of dust and cobwebs, the building didn't seem to have aged a second past the accident of 1939. Strange items would be found across the building as-well, music from the jazz age played from nowhere in its vicinity and voices could be heard from within the boiler-room crying for help; at night screaming could be heard from the elevator shafts of the tower where the elevators once stood. What is most notable is that the lightning which made contact with the hotel seemed to merge it with another plane of existence and as a result caused paranormal activity to leak into the reality of the tower.

Most of those involved in reopening the establishment were ambivalent to its dark ongoings; not knowing or not caring of the horrors. The bellhops which operated the establishment however seemed to know and were more than eager to bring in new, "guests", using the maintenance elevators of the boiler-room in-place of the public ones.

The Hollywood Tower Hotel is situated at the end of Sunset Boulevard and (at least in in the 1990s) was located between G-Force Records and the Hollywood Hills Amphitheater. When it was constructed it has two elevator shafts visible from the outside, but in modern-times, only a burned scorch-mark on the side of the tower exists where they once stood.

The Hollywood Tower Hotel featured many activities and places for their guests to relax and unwind. The directory of the hotel in-particular would list:

In addition to this, the main-floor held gardens, a shop known as Tower Gifts, the sunset room, steam baths, fountain room, beverly room, and a small library. Said library held a great number of books, letters addressed to Victoria West and Rod Serling, a book covered in strange glyphs translating, "To Serve Man", a miniature inhuman figure, and a fortune-telling machine with the visage of the devil. This room also contains a television, loaded up with a supposed lost episode of the Twilight Zone. The main-floor also holds a storage room containing a wide number of oddities like a ventriloquist's dummy and an antique slot machine.

The public elevators of the hotel were left out of order, being singed with dented doors and cracked stone. In their place, Hotel staff and guests utilized the maintenance service elevators which had large capacities. Said elevators were strangely enough given their licence to operate on the very night of the the accident by a man named Cadwallader.

A faded mural advertising the Pacific Electric Railway trolley has the Hollywood Tower Hotel in the background.

The hotel is alluded to on a newspaper found at Camp Discovery in Shanghai Disneyland's Adventure Isle. On a newspaper talking of the League of Adventurers discovery of the Temple of the Crystal Skull, the newspaper would also mention the five guests going missing in an elevator-crash at the Hollywood Tower Hotel. Erroneously, this newspaper is dated to July 13, 1931 which is eight years before the elevator accident would transpire.

The logo and some memorabilia from the hotel are found in the Collector's office collection.

The hotel used to appear on posters for this attraction.

The Hollywood Tower Hotel is the titular setting for this attraction.

The Tower of Terror (film)

The hotel is the setting of this film.

The hotel makes a photograph cameo as one of the many paranormal locations connected to the Haunted Mansion via the endless staircase.

The Pilgrims of Rayne

The hotel is referenced in this book as being sister-hotel to The Manhattan Tower Hotel.

The Hollywood Tower Hotel the evening of Halloween 1939 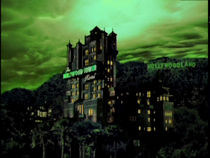 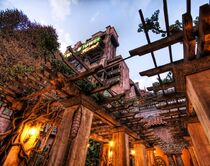 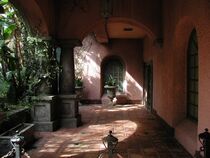 California version of the hotel. 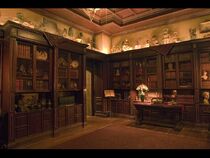 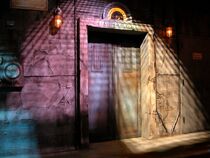 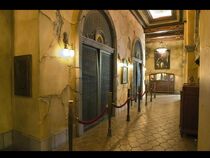 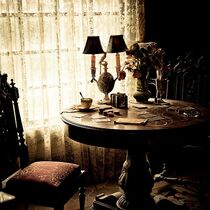 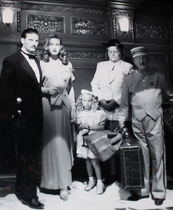 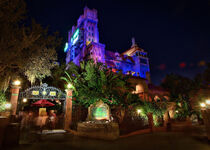 The hotel at night.

The ghastly ghosts of the missing guests.

The indicator above the service elevator. 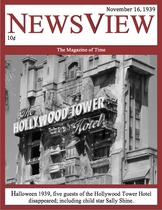 Recreation of the NewsView Magazine prop from the film.

The Hollywood Tower Hotel with the extra wing in the front.

The Hollywood Tower Hotel logo that graces the corner of the hotel envelopes.