The Holocrons of Fate

October 1, 2016
"The Holocrons of Fate" is the fortieth episode of the Disney XD animated series, Star Wars Rebels. It premiered on October 1, 2016, and is the third episode in the third season.

Ezra and Kanan are on their way to rendezvous with one of their transport ships, only to discover that it was severely damage as if it had been attacked. On board, Ezra and Kanan discover the remains of what looked like a big fight. They only found one survivor and a droid. Although weak, the surviving Rebel mumbles "red blade", looking for Ezra, and was forced to tell where the Ghost was. Ezra at first suspects it was an Inquisitor and Kanan felt they needed to warn Hera. They return to their ship and made contact with Hera, only to discover that she and the others have been taken prisoner by Maul. He wants both the Jedi and Sith Holocrons in exchange for the safety of their friends. Despite Hera’s plea to not give in, Ezra and Kanan agree to bring him both Holocrons. However, getting them will not be easy. The Jedi Holocron is aboard the Ghost and the Sith Holocron is with The Bendu.

Travelling through hyperspace, Maul has Hera, Sabine, Zeb, and Chopper cuffed and held at gunpoint by his droids. Forced to go with his request, Hera gives Maul a tour of the ship. She shows him their cabins. The last one is Kanan’s, which is where Maul wants to be. He wants to know where Kanan keeps the Holocron but Hera refuses to say anything, claiming she knows nothing about him. Maul does not believe her, and uses the force on her to reveal where Kanan’s Holocron is. He succeeds and finds the Holocron hidden in a draw under the bed.

Meanwhile, Ezra and Kanan return to Atollon and arrive at the place where Kanan met the Bendu. Kanan calls for him and there is no reply. Seeing that nobody is around, Ezra at first does not believe his master about the Bendu. Suddenly, Krykna spiders appear. Ezra panics but Kanan does not. He tells his apprentice to remain calm but, due to a past experience with the spiders, hesitates and ignites his Lightsaber. The spiders surround the two Jedi but then runaway as the Bendu appears before them. He welcomes them both and the Jedi get down to the point. They explain to the Bendu that Maul has taken their friends hostage and he wants both the Jedi and Sith Holocrons for reasons they do not know. The Bendu suspects that he is planning to bring them together which he describes to be a great danger. While the Holocrons are basically libraries of information, they are also more. According to the Bendu, if two such powers sources of knowledge are combined they will grant a Jedi or Sith through The Force a vision of any secret, wisdom or destiny they seek. Such hidden truths could bring chaos in the hands of evil. Ezra asks the Bendu where the Sith Holocron is, only to be told that he must seek it out with his master before pointing the direction to where the Holocron lies; deep inside a Krykna spider’s cave. Ezra chooses to go in alone but not before Kanan takes away his weapon, knowing that the spiders will attack if he tries to fight back. Ezra is warned by the Bendu that the cave runs deep with many twists and turns, so he will have to rely on Kanan’s guidance if he is to find the Holocron.

Back on the Ghost, Maul, full of frustration, struggles to open the holocron with his own power. The Rebels take this opportunity to capture Maul and reclaim the ship. Using Chopper as a distraction, the Rebels take out the droids and remove their binders. They escape to the engine room, and as soon as Maul notices they are missing he begins searching for them. The Rebels lure Maul to the cargo hold and capture him by using the magnetic fields that attract Maul’s mechanical legs. But he manages to break free by deflecting back a blaster shot that destroys the control terminal, shutting down the field. He quickly overpowers the Rebels and recaptures them.

Back on Atollon, Kanan continues to guide Ezra through the spider caves through the comlink. Ezra feels lost and at the first sight of Krykna spiders he panics. He becomes surrounded but is saved by Kanan, who decided to come and help him. A Krykna spider approaches them, but through the force Kanan drives it away. Ezra is impressed by this since he could never do it before, only to be told that ever since Malachor Kanan has been forced to see things differently. They venture on into the caves and for a while Ezra says nothing. But then he finally opens up to admitting his guilt for what happened on Malachor, only to be told that it was not his fault. Kanan assures his apprentice that he does not blame him for what happened and now it was time for him to forgive himself. Ezra gives a sad smile and embraces his master with a hug before continuing their search. They soon find the Sith Holocron guarded by a dozen Krykna spiders. Remaining calm, both master and apprentice use the force to levitate the Holocron to them. At the same time they attract the attention of the Krykna spiders, and despite Ezra’s fear Kanan instructs him to remain calm no matter what. They now have the Holocron, and remaining calm Kanan and Ezra leave the cave peacefully and unharmed. They return to the Bendu, who gives them one last warning. Maul will not be able to open the Jedi Holocron without assistance from one of them. Should either one of them choose to assist Maul there will be a price once they unravel the secrets of both Holocrons.

Soon Ezra and Kanan were on their way to the meeting point, which was a secret base located in an asteroid field. Upon landing, they find Maul waiting for them. Even though they brought what he wanted, Maul is not yet done. He has Ezra escorted to the commander center while he takes Kanan to see their fellow Rebels. However, Maul double crosses Kanan once again and sends him out the airlock to die in the vacuum of space. But Kanan manages to float back inside the hanger bay before he can suffocate. He then takes out the droids who are holding Hera, Sabine, Zeb, and Chopper, and sets them free before they turn their attention to saving Ezra.

Maul meets up with Ezra in the commander center and has him sit with him. Before they begin, both admit to one another that they know that if they combined the Holocrons they will be granted the answers they seek. Ezra seeks the destruction of the Sith while Maul only seeks something simpler and equally elusive; hope. Then Maul and Ezra move onto the task at hand. Using the force they combined the Jedi and Sith Holocrons. Through blinding light, Ezra begins to see something but cannot make it out. Maul encourages him to look further. Just then, the Rebels show up. While the others are blinded by the light, Kanan walks into it. He persuades his apprentice to turn away while he can while at the same time Maul encourages him to stay focused on his desire. Soon Maul begins to see what he desires and so does Ezra. However Kanan convinces Ezra to look away, causing the beam of light produced by the Holocron’s to erupt. In the mids of the commotion, Maul slips away and escapes, full of aggressive ambition by what he had saw. "He lives!" he keeps saying.

Meanwhile, Ezra explains what he saw. Images of places that were familiar and unfamiliar. He was unsure if it was what he wanted to see or what Maul was trying to see. Ezra does not know what they mean but Kanan guarantees they will find out together. 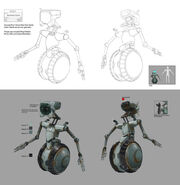 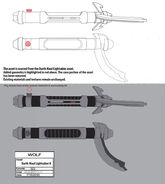 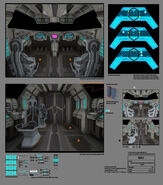 Maul uses the force on Hera

Kanan gets sucked into the vacuum of space