The Horse in the Gray Flannel Suit is a film directed by Norman Tokar and written by Eric Hatch and Louis Pelletier, released on December 20, 1968.

Madison Avenue advertising executive Fred Bolton, a Connecticut widower living beyond his means, is beset by two major problems: first, unless he comes up with a highbrow gimmick to publicize a sour-stomach remedy called Aspercel, his tyrannical boss, Tom Dugan, will fire him; second, his teenaged daughter Helen has run up a $900 bill at Suzie Clemens' riding academy. In the hope of solving both his problems at the same time, Fred gets Dugan to buy a horse, names it Aspercel, and then persuades Suzie to train Helen for all the fashionable horse shows. Helen does begin to win ribbons, but the amount of publicity is below Dugan's expectations. When Helen learns that her father's job is at stake, she falters under pressure and fails to win an important match. Suzie, however, realizes Aspercel's potential when the animal carries Fred over a 7-foot wall and tops that by out-racing a police car. Volunteering to ride Aspercel in the International Horse Show in Washington, Suzie suggests that her ex-fiancé, Archer Madison, be brought in as trainer. Suppressing his jealousy of Archer, Fred reluctantly agrees. As the result, Suzie and Aspercel win the championship, and all ends happily as Fred is rewarded with both a promotion and Suzie's love. 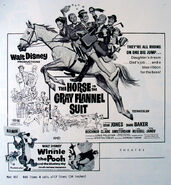 Retrieved from "https://disney.fandom.com/wiki/The_Horse_in_the_Gray_Flannel_Suit?oldid=4513918"
Community content is available under CC-BY-SA unless otherwise noted.