The Hound of Ulster

Gargoyles
"The Hound of Ulster"

The World Tourists arrive in Ireland. Unbeknownst to them, another of Oberon's children, the Banshee, is in the midst of distracting a young human named Rory from a powerful secret, but Bronx's arrival brings it to light. Rory battles the Banshee and aids in the rescue of Goliath, Elisa and Angela. 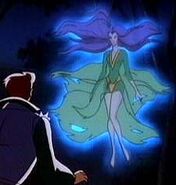