The Incredibles: Rise of the Underminer

The Incredibles is a video game based upon the film of the same name, released in 2004 for the Game Boy Advance, Mac OS X, Microsoft Windows, Nintendo GameCube, PlayStation 2, and Xbox. This is the only Pixar game that has a Teen rating.

On the GBA version, Incredi-Ball is absent. However, the character of Frozone is playable, and, in addition, Elastigirl as the form of a boat is playable. Violet is also playable for two stages, instead of one.

Bomb Voyage attempts a bank heist in Metroville, but superheroes Mr. Incredible, Frozone, and Elastigirl set out across the city's rooftops to stop him. Mr. Incredible captures Bomb Voyage in the bank, but then his fanboy, Buddy Pine, shows up. Buddy has no superpowers, but wants to be a superhero. He begins to fly out the window on his rocket boots to notify the police of Bomb Voyage's capture, but Mr. Incredible notices a bomb on Buddy's cape. Releasing Bomb Voyage, Mr. Incredible grabs onto Buddy's cape and goes on a wild ride through the city.

It comes about the superheroes are being sued for too much destruction, and are forced by the government to disguise themselves as civilians and try to live normal lives. Mr. Incredible marries Elastigirl and they have three children: Violet, Dash, and Jack-Jack.

Mr. Incredible is then approached by Mirage, who tells him that she runs a secret organization on an island called Nomanisan and that their latest machine, the Omnidroid 08, is off wreaking havoc on the island. Mr. Incredible goes to Nomanisan, where he tracks down the Omnidroid and destroys it. Meanwhile, the entire fight was witnessed by Mirage and her anonymous employer, whose face is not shown, through a robotic bird. The employer comments that Mr. Incredible's victory is surprising.

Mr. Incredible returns to Nomanisan on another mission. When he reaches the conference room, he goes through numerous security guards and other systems but once he gets to the empty meeting room, another omnidroid tears the wall apart and grabs Mr. Incredible. The omnidroid's leader, Syndrome, appears, who was Mirage's employer and Buddy Pine. He reveals that he wants to kill Mr. Incredible and the world's other superheroes. Mr. Incredible escapes Syndrome by jumping off a waterfall.

Elastigirl goes to Nomanisan to save her husband and safely stores Violet and Dash in a cave as she sneaks into Syndrome's base. The next morning, Violet and Dash accidentally activate an alarm system and are forced to use their powers to escape from Syndrome's guards. They learn not to be ashamed of their powers and to work together.

Finally, all of the Incredibles meet up and activate one of Syndrome's rockets, using it to escape back to Metroville, where the omnidroid is wreaking havoc. In a battle reminiscent of those of the old days, the Incredibles and Frozone work together to destroy the robot. Now, superheroes are loved by the public again. 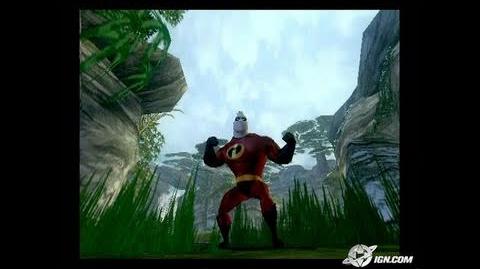 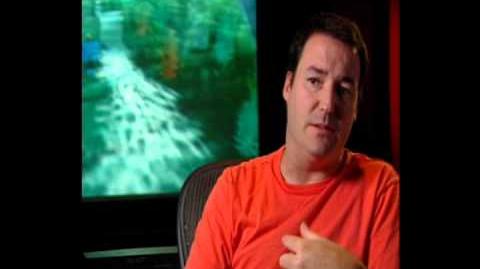 The Incredibles Making of the Game

The Disney Wiki has a collection of images and media related to The Incredibles (video game).