The Kindergartners are a group of savage warrior-like little children who play apart from the big kids of Third Street School. They aren't overall that trusting of the Big Kids (older students).

They make up their own unique group among the students. The kindergartners live as uncivilized, wild, and dangerous little urchins who wear face paint, carry tribal weapons, harass the older children and have even attempted to cannibalistically eat them (as seen in the first and other episodes). 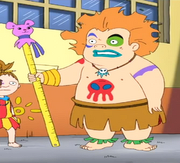