October 22, 2016
"The Last Battle" is the forty-third episode of the Disney XD animated series, Star Wars Rebels. It premiered on October 22, 2016, and is the sixth episode in the third season.

Hera and Sabine drop Ezra, Kanan, Zeb, and Chopper off on Agamar where stands the wreckage of an old transport ship once used by the Separatist Alliance. Following Rex’s lead, the Rebels hope to find a huge supply of weapons and explosives for the Rebellion. They arrive at an opened hanger and soon find a supply of proton bombs, enough for the Rebellion’s fight against the Empire. All, except Chopper, are about to gather them when they suddenly get trapped inside a ray-shield. Then, to everyone’s surprise, a group of Separatist Battle Droids appear and surround them. They are prepared to kill the Rebels, mistaking them as members of the Republic, but receive new orders from their commander to bring them in alive. Then they render them unconscious using a stunner.

Later, the Rebels regain consciousness and find themselves in the commander center. Standing before them is a Super Tactical Droid known as General Kalani, and learn from the droid that prior to the shutdown command of the entire droid army Kalani and his forces avoided it after assuming it was a Republic trick. Despite telling the droid that the war over, Kalani has a plan to end the Clone Wars with a victory for the Separatist Alliance. He challenges the Rebels to a battle against his forces with Zeb as the hostage they must save. Even though Kanan and Rex refuse Ezra accepts Kalani’s challenge in exchange for Zeb’s safety and the proton bombs. Even Kanan and Rex agree to go with it. As the droid army take up their positions, Chopper finds a separatist’s shuttle and sends out a distress call. Meanwhile, Hera and Sabine are being pursued by Imperial forces after being ambushed during a supply run. Leading the pursuit is Governor Pryce. At the same time, the Imperials receive Chopper’s distress call from the Agamar System before the Rebels did. Governor Pryce gives orders to locate the nearest Imperial outpost to Agamar and deploy them.

Back on Agamar, the battle between the Rebels and the Separatists is about to begin. Listening to Kalani’s instructions, the Rebels must fight their way back to the command center and capture it to free Zeb. Kanan volunteers Rex to lead the way since he has more battle experience than the rest of them. Rex’s plan is to get inside the hanger first, and warns them that Kalani has the advantage over them in numbers and firepower. Their only chance of victory is to put him on the defensive by going in aggressive and use the element of surprise. The droid army marches out of the hanger and the battle begins. The droids open fire and Ezra and Kanan deflect their attacks, giving Rex the cover he needs to take them out with thermal detonators in hopes of scattering their numbers. With the droids scattered the Rebels fight their way to the hanger and take cover behind a crate. The hangar looks clear but Rex advises caution. General Kalani observes the battle from the command center, and when he notices the Rebels on the move he orders the destroyers to be deployed. The destroyers show up on the catwalk and open fire on the Rebels. They take cover behind another create. Ezra notices a crane on the other side of the hangar, which gives him an idea to take out the catwalk and the droids. While Kanan and Rex distract the destroyers Ezra sneaks pass them to the crane, unaware that Kalani is watching. He then orders more droids to move in. Ezra reaches the crane, and using The Force he rams it into the catwalk, taking out both the destroyers and the droids. The Rebels regroup and fight their way to the command center. Ezra begins to notice that both Rex and Kalani are taking this battle to heart; both are determined to gain a victory.

They soon make it back to the command center, only for Kalani to reveal his deception. Rex almost shoots the droid, but Ezra stops him and stands in-between the two enemies, stating that neither of them won this battle. Listening to Ezra’s reasoning, the Clone Wars came to a suspicious end with no clue over who won; the Republic or the Separatists. All he knew was that the Jedi were wiped out, the clones were decommissioned, and the droid army was simply shutdown, but who really won was a good question. During a moment of silence, they later notice Imperial forces have arrived and have deployed Stormtroopers and walkers to intercept. This makes Ezra realize that the real victors of the Clone Wars was the Empire. The clones and droids fought one another and when they were weak enough the Empire took over. Understanding Ezra’s logic and reasoning, both General Kalani and Rex agree they are both on the same side and their true enemy was the Empire.

Working together, the Rebels and the droids conjure up a plan to escape using the three shuttles that Chopper found. However, the odds were against them. Kalani’s droid army was depleted, the shuttles had no weapons, and they did not have the firepower to take on the walkers. But then Kanan brings up the explosives they originally came for, giving Rex an idea. They will roll them into the feet of the walkers and blow them up, giving them the time they need to escape. To set them off, the droids will deliberately fire at Ezra and Kanan to redirect their plasma bolts towards the bombs since they are not accurate. With the plan set, the Rebels and the droids proceed. The droids, led by Zeb, move in and attack the scout walkers and troopers, giving them the time they need to roll the proton bombs at the AT-ATs. On Kalani’s orders, five of his droids fire at Ezra and Kanan, who both redirect their blasts at the bombs, setting them off and destroying one of the walkers. Then they make a retreat to the three shuttles and fly out with only one shot down. The Rebels and the Droids have escaped.

Both sides congratulate one another for their victory, but most of the credit goes to Ezra. Because of him, he made them realize that neither one of them were meant to win the war and could have brought it to an end with a victory for both sides. General Kalani bids the Rebels fair well and the two shuttles go their separate ways. The Ghost is waiting for the Rebels in orbit. Kanan informs Hera that they failed to get the explosives but were successful in getting a new Phantom. 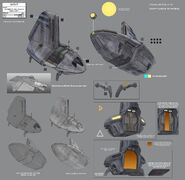 Retrieved from "https://disney.fandom.com/wiki/The_Last_Battle?oldid=3881855"
Community content is available under CC-BY-SA unless otherwise noted.