The Legend of Young Dick Turpin

February 13, 1966 (part 1)
February 20, 1966 (part 2)
"The Legend of Young Dick Turpin" is a 1966 telefilm produced by Walt Disney Productions. It was originally broadcast on NBC as a two-part episode on Walt Disney's Wonderful World of Color on February 13, and February 20, 1966. It was later released theatrically overseas. The telefilm was directed by James Neilson.

As an account of one of England's most famous, home-grown outlaws, Dick Turpin didn't have the headline notoriety of, say, Jesse James, but his country-long ride still has a substantial interest. Unfortunately this movie, with David Weston and George Cole, can be described as an anagram of the surname: a turnip. Lumpen and with B-picture clichés, there is little point or purpose, though the horse, Black Bess, does well enough. Action adventure starring David Weston and George Cole. A young Dick Turpin is caught poaching for food and when he is unable to pay the fine, the Lord of the Manor confiscates all his possessions. After rescuing his horse, Black Bess, Dick escapes to London's underworld and gets involved with a gang of thieves. A farmer turns to highway robbery because of the greed of the people around him. 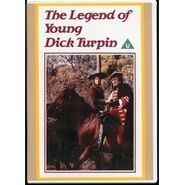 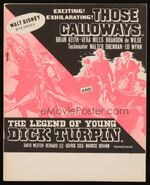