The Disney Afternoon
"The Legend of the Chaos God"

"The Legend of the Chaos God" is a five-part story arc that ran in Disney Adventures in the later half of 1994. Written by Bobbi J.G. Weiss and drawn by Cosme Quartieri, it is unique among Disney Adventures comics in that it is a crossover between five different cartoons from The Disney Afternoon - TaleSpin, Chip 'n Dale Rescue Rangers, Goof Troop, DuckTales, and Darkwing Duck.

The first chapter was published in the July 1994 issue, with the next four chapters being spread across the September, October, November, and December issues. The likely reason for this odd delay between the first two chapters is likely due to the magazine having to print a comic adaptation of The Lion King in two issues published in-between. (Ironically, The Lion King comic adaptation was also published as a graphic novel by Marvel Comics at around the same time.) It is likely the story was meant to commemorate the magazine's 50th issue, but due to the delays caused by running The Lion King comic, the final chapter was instead published in the 51st issue.

"The Legend of the Chaos God" is also notable in that it is the last full-length comic story based on TaleSpin and Rescue Rangers to be published in Disney Adventures (the only new stories since then were brief gag stories). It is also the last new regular DuckTales story published in the magazine, with only two more stories being printed in the February 1996 and November 2007 issues.

The eponymous Chaos God, Solego, is an evil immortal sorcerer of the ancient world who destroys everyone who opposes his rule. Fortunately, a young wizard named D'Shane manages to split Solego in two, imprisoning the sorcerer's immortal mind in a crystal cage and his mystical powers in its gold setting, keeping the halves separated so that Solego can never escape.

Many centuries later, in the time of TaleSpin, an archaeologist named Professor Simon Potsherd removes the two artifacts from the jade block they were kept in and fixes a chain to the crystal for handling. He arranges to have them transported to Cape Suzette, but the gold setting gets lost in the ocean, and an ordeal at Higher For Hire arises when Rebecca Cunningham is possessed by Solego's crystal. After a minor tussle, Baloo and Kit drop the crystal deep into the ocean.

Part 2: "To Half and Half Not" (Chip 'n Dale Rescue Rangers)

Fifty years later, a fisherman (who bares an interesting resemblance to Dijon) fishes the crystal out from the sea and brings it to the museum where the gold setting now resides (having been donated by Scrooge McDuck after being found during a diving expedition). That night, Fat Cat and his cronies sneak into the museum to steal it, and while foiling his plans, The Rescue Rangers have a brush with Solego, who nearly gets himself back together by possessing Dale and Fat Cat . Fortunately, a well-timed electric shock to Fat Cat keeps the two halves apart. Later, the Rescue Rangers have a pair of crows, named Edgar and Allan, to carry the crystal and the setting, respectively, in different directions to keep them separated.

Edgar accidentally drops the crystal into a car with a computerized brain - which is being being delivered to Pete in Spoonerville. When Goofy gets a look at the car, he becomes suspicious that it may be haunted. Later that night, Solego uses the car to learn from a TV report that the gold setting has been taken to Scrooge McDuck's Money Bin after having been found in a pawn shop. Upon seeing the car hack into his television set, Goofy realizes that Pete's new car is possessed. He and Pete try to rid the car of the evil spirit, to no avail. Solego then entraps Goofy and Pete inside the car's interior, and forces the latter to turn the engine on so he can get to Duckburg. However, the car ends up going over a cliff, though not before Goofy and Pete escape. From his battered state, Solego uses the car's phone to hire Spoonerville's tow service to tow the car to Duckburg, under the guise that it's being paid for by Scrooge McDuck.

The next morning, Fenton Crackshell takes a look at the car (which Scrooge insists he knows nothing about) and finds the crystal inside. Under Solego's spell, Fenton signals for the Gizmosuit and becomes Gizmoduck. But Solego takes full control of the Gizmosuit and, having no use for Fenton, kicks him out. Upon breaking into the Money Bin, however, Solego finds out that the gold setting is not actually in the Money Bin, but in St. Canard (as Scrooge had sent it there to be cleaned). Scrooge, Fenton, and the nephew trio meet with Professor Potsherd's son, Bisk, who reveals to them the backstory of the Chaos God and D'Shane. Subsequently, Scrooge sends Fenton to St. Canard, and then calls up S.H.U.S.H. Headquarters, because there's only one person in St. Canard who can help now - Darkwing Duck.

In St. Canard, J. Gander Hooter briefs Darkwing and Launchpad on the mission. The duo (and Fenton) arrive too late to stop Solego from locating the setting. Solego brings the crystal and the setting together and, now assuming his original form, brings hell to St. Canard. A battle rages between Solego and the good guys; the Chaos God disintegrates Fenton's Gizmosuit and turns Launchpad into chopped liver, leaving Darkwing to stand alone against him. After some cat and mouse battle between the two, Darkwing accidentially defeats Solego by ducking behind a reflective satellite dish, which reflects Solego's own powers back at him and splits him back into the crystal and setting, which are then permanently re-sealed back in the jade block and buried deep beneath Scrooge's Money Bin.

Rebecca gets possessed by Solego.

The title page for the second chapter. 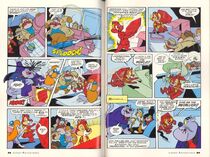 The title page for the third chapter.

The title page for the fourth chapter. 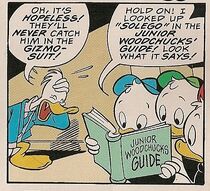 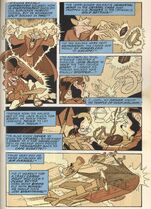 The title page for the fifth chapter. 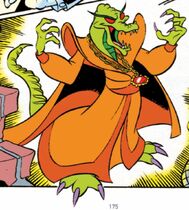 Retrieved from "https://disney.fandom.com/wiki/The_Legend_of_the_Chaos_God?oldid=3893595"
Community content is available under CC-BY-SA unless otherwise noted.