The game's gameplay varied between the two consoles.

Due to the PlayStation console's 3D polygon graphics, the gameplay became slightly more varied. Simba's capabilities are identical to the first The Lion King video game in which he can growl, leap, roll and run.

The game is mostly a side-scrolling platformer with occasional levels where the camera is top-down. The gameplay is very similar to the first The Lion King video game, in which the player takes control of Simba and must leap and run between platforms while fighting enemies and avoiding pitfalls. During levels Simba can collect pawprint-shaped tokens which add to the overall score.

In the PlayStation version, voices, music and sound effects from the film were used. Clips from the film are placed between levels although many of the lines were redubbed by other Lion King related actors, including but not limited to Cam Clarke, Shaun Fleming, Vanessa Marshall, Jim Cummings, and Kevin Schon.

In the Game Boy Color version of the game there was only one piece of music used on every level. Some of the animation for both adult Simba and cub Simba was recycled from the previous The Lion King video game.

The PlayStation release of the game generally received good reviews but was criticized for being too short and for repetitive level designs.[1] 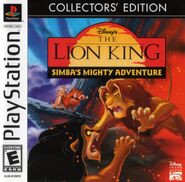