English
"The Little Mermaid" is an upcoming 2023 American live-action film which will be distributed by Walt Disney Pictures. It is a remake of the 1989 Walt Disney Animation Studios feature film of the same name, and loosely based on the fairy tale by Hans Christian Andersen. Lin-Manuel Miranda and Marc Platt will produce the film. In addition to supervising the story, Miranda will be teaming up with composer Alan Menken to re-work songs from the original and the two will also be composing new songs for the film.[3] The film is scheduled to be released on May 26, 2023.

A young mermaid makes a deal with a sea witch: trading her beautiful voice to get human legs so she can discover the world above water.

In addition to the cast above the film also includes Jessica Alexander, Russell Balogh, Adrian Christopher, Emily Coates and Simone Ashley who have been cast in undisclosed roles.

Halle Bailey on the last day of filming. 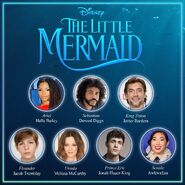 Differences from the 1989 film