Disney Wiki
Register
Don't have an account?
Sign In
Advertisement
in: The Little Mermaid, Animated television series, TV series based on films,
and 6 more
English

September 11, 1992 – November 26, 1994
The Little Mermaid is an animated Walt Disney Television Animation television series based on the 1989 Disney film of the same name. It features the adventures of Ariel as a mermaid prior to the events of the film. This series is the first Disney television series to be spun off from a major animated film. Some of the voice actors of the film reprise their favorite roles in the series, among them Jodi Benson as Ariel, Samuel E. Wright as Sebastian, Kenneth Mars as King Triton, and Pat Carroll as Ursula.

The Little Mermaid premiered in the fall of 1992 with the animated prime time special called "Whale of a Tale", then moved to Saturday mornings. This series originally ran on CBS, with an original run from 1992 to 1994. It was later shown in reruns on the Disney Channel and Toon Disney.

Some of the episodes contain musical segments, featuring original songs written for the series. The opening theme to the show is an instrumental combination of the songs "Part of Your World", "Under the Sea", and "Kiss the Girl", while the closing theme to the show is an instrumental version of "Under the Sea". The overture for the stage musical of The Little Mermaid is similar to the TV series' opening theme.

The show can be currently be seen on:

The Little Mermaid television series is a prequel to the eponymous film. The story is set before the events in the 1989 film, and follows Ariel's adventures as a mermaid still living under the sea with her father, Sebastian and Flounder. Various episodes highlight her relationship with her friends, father and sisters, and usually involve Ariel foiling the attempts of various enemies that intend ill harm to her or to her kingdom.

For a complete list of all of the episodes in the series, see List of The Little Mermaid episodes.

Most episodes revolve around Ariel's adventures in and around her home of Atlantica. While some have her encountering and solving a problem (sometimes of her own making) that arises, others show Ariel facing off against various villains. Some, but not all, episodes feature a musical number relating to the plot of the episode. As in the film, Ariel has a love for human things and is often shown adding to her collection. Likewise, she often clashes with her father due to his prejudiced regarding humans and human culture. However, at times, they do see eye-to-eye, as in the episode "Stormy". Ariel is shown attempting to ride a wild seahorse that her father warned her was dangerous. After Ariel is injured, she admits he was right about the danger; Triton later offers her a tamer sea horse more appropriate to her skills. Ariel's relationship with her siblings, specifically Alana and Arista, is shown in more detail.

One of the most notable episodes is "Metal Fish", in which Ariel encounters an animated version of Hans Christian Andersen, who was the real-life author of the original "The Little Mermaid". The episode also introduces Archimedes, a self-proclaimed scholar of human culture, whose knowledge is far more accurate than Ariel's. Mr. Andersen is shown exploring the sea in a primitive submarine capsule, which begins to leak air after an accident. Ariel confronts her father with the fact that, despite his hatred of humans, he, as well as all merpeople, are half-humans in an attempt to appeal to his compassion and better nature in order to save Hans's life when his ship is stranded at the bottom of the ocean. The ploy, unsurprisingly, works, as Triton has always been depicted as a compassionate (if a somewhat conservative) monarch. Mr. Andersen's encounter with the merpeople appears to inspire the original tale. A voice-over at the end of the episode talks about the real Hans Christian Andersen, while the image on the screen shows Ariel sitting on a rock in the style of the Little Mermaid statue in Copenhagen Copenhagen harbor. If this is to be chronologically accurate, this places the time frame in which this series takes place at around 1836 when the story was first written or shortly before 1837 when the story was actually published.

This situation is repeated in The Legend of Tarzan episode "Tarzan and the Mysterious Visitor" where Tarzan meets his author Edgar Rice Burroughs who travels to Africa in search of inspiration for a new novel. 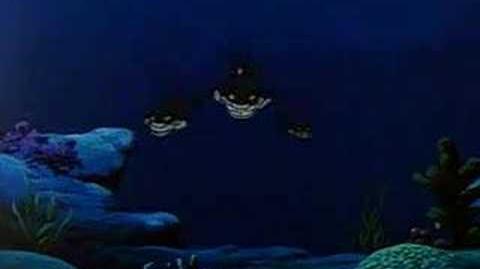