The Living Mummies of Toth-Ra!

DuckTales
"The Living Mummies of Toth-Ra!"

After Launchpad McQuack crashes the Duck family into the desert, Scrooge McDuck, the kids, and Launchpad make their way into a giant pyramid where they discover it is the pyramids of the ancient Egyptian pharaoh Toth-Ra. Inside, they explore the pyramid but accidentally activate a trapdoor the entire group falls into.

While falling, Louie and Webby get separated from the others, who find themselves in the presence of a community dressed as mummies. The leader, a jackal named Amunet, introduces themselves as the descendants of the pharaoh's servants who have lived under the rule of Toth-Ra for thousands of years. To appease the pharaoh, they give him offerings and he provides them with a brief moment of sunlight from outside. Then, Scrooge notices that Louie and Webby are missing; Amunet theorizes that the two may be inside Toth-Ra's chambers. Wanting to rescue the kids, Scrooge tries to convince the living mummies that their way of life as oppressive and restricts their freedom. He fails to convince them to stand up and rise against the pharaoh arguing they deserve freedom. However, the mummies discover the burrito food from Launchpad, and the revelation convinces them to revolt.

Meanwhile, Webby and Louie find themselves in Toth-Ra's sacred temple. Webby takes the time to decipher a prophecy warning of Toth-Ra's curse, while Louie steals Toth-Ra's treasures dishonestly claiming that he is cleaning up the room. They are ambushed by the temple guard Sabaf who is about to throw them into a spiked pit, but Louie convinces him that he is a prince and Webby stipulates a prince needs a proper burial. While Sabaf is distracted in the though, the two escape. Away from Sabaf, Webby calls Louie out on manipulating situations selfishly, but he ends up finding the location of a secret passage. However, the passage leads back to the chamber, where they are confronted by Toth-Ra himself. But Webby and Louie discover that Sabaf and his antecedents have been manipulating Toth-Ra's dead body in order to perpetuate Toth-Ra's rule. Just then, Scrooge and company charge in, where Sabaf's deception is revealed to all.

Louie then fools around with the contraption connected to Toth-Ra, but when he accidentally drops it across the seal on the floor it was not meant to cross, Toth-Ra is revived and goes on a rampage.

The mummy sets his sights on Louie, despite the McDuck' and living mummies' efforts to fight back. After Louie runs off with Toth-Ra following him, Amunet rallies the other servants together and devises a plan with the ducks to stop Toth-Ra. Outside, Louie is forced into a corner by Toth-Ra. Breaking down, Louie confesses his misdeeds towards the pharaoh and begs his forgiveness, to which the pharaoh demands Louie's life as compensation. However, Webby opens the tomb to sunlight, which reflects onto Toth-Ra and blinds him long enough for the servants to trap him in a burrito wrap and back into his temple; despite Toth-Ra's squirming, he is placed back on his throne, ending the curse.

The McDucks escort the living mummies to the outside, and Launchpad offers them to go for burritos (which a reluctant Scrooge pays for). Louie also thanks Webby for saving his life and promises to lie less in the future. As a reward for freeing them, Amunet gives Launchpad Toth-Ra's khopesh and Scrooge a burrito crafted by the mummies; Scrooge tastes it and enjoys the burrito, to the mummies' delight. 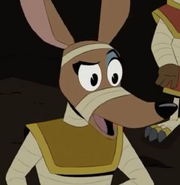