The Lion Guard
"The Lost Gorillas"

December 2, 2016
"The Lost Gorillas" is the twenty-second episode of the Disney Junior animated series, The Lion Guard. It premiered on December 2, 2016.

The Lion Guard encounters two dimwitted mountain gorilla princes, Majinuni and Hafifu, who have a message for Simba on behalf of their father, King Sokwe of the Theluji mountains. Unfortunately, the gorilla brothers have forgotten the message. Simba explains to Kion that every wet season, King Sokwe gives Simba a message to let him know if their peace treaty still stands. Kion slides down the mountain in trouble but he unleashed his claws and the gorilllas save him. 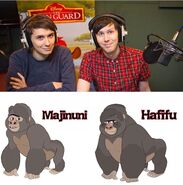 Retrieved from "https://disney.fandom.com/wiki/The_Lost_Gorillas?oldid=3133491"
Community content is available under CC-BY-SA unless otherwise noted.