Herbie Rides Again
The Love Bug was the first in a series of movies made by Walt Disney Productions that starred a white Volkswagen racing Beetle named Herbie. It was based on the 1961 book Car, Boy, Girl by Gordon Buford. It follows the adventures of Herbie, his driver Jim Douglas (Dean Jones), and Jim's love interest, Carole Bennet (Michele Lee). It also features Buddy Hackett as Jim's enlightened, kind-hearted friend, Tennessee Steinmetz, a character who creates "art" from used car parts. English actor David Tomlinson portrays the devilishly evil Peter Thorndyke, the owner of the auto showroom and a SCCA national champion who sells Herbie to Jim and eventually becomes his racing rival. It was the highest-grossing film of 1969.

After another race ending in a crash, Jim Douglas a down-on-his-luck race driver finds himself without a car and heads into town in search of some cheap wheels. He is enticed into an upmarket European car showroom after setting eyes on an attractive sales assistant, Carole Bennet. Jim witnesses the dealership's owner, Peter Thorndyke, being unnecessarily abusive towards a white Volkswagen Beetle that rolls into the showroom, and defends the car's honor, much to Thorndyke's displeasure. The following morning Jim is shocked to find the Beetle parked outside his house and that Thorndyke is pressing charges for grand theft. The car is seen following Jim home. While Thorndyke (and the police) believe it is stolen, Douglas thinks he is the victim of a prank. A heated argument between Jim and Thorndyke is settled when Carole persuades Thorndyke to drop the charges if Jim buys the car on a system of monthly payments.

Jim soon finds the car is prone, going completely out of control he believes Thorndyke has conned him. Tennessee, however, believes certain inanimate objects have hearts and minds of their own and tries to befriend the car, naming it Herbie. Jim's feelings about his new acquisition soon improve when it appears Herbie is intent on bringing him and Carole together. He also discovers Herbie to have an incredible turn of speed for a car of his size and decides to take him racing. After watching Jim and Herbie win their first race together, Thorndyke, himself a major force on the local racing scene, offers to cancel the remaining payments Jim owes on Herbie if he can win a race that they will both be competing at Riverside. Jim accepts, and both enter the race, Douglas in Herbie and Thorndyke in a silver Jaguar XKE. Despite Thorndyke's underhanded tactics, he and Herbie take victory, narrowly beating Thorndyke in a late race pass.

Over the next few months, they go on to become the toast of the Californian racing circuit, while Thorndyke suffers increasingly humiliating defeats. Thorndyke finally snaps and persuades Carole to take Jim out on a date while he sneaks round to Jim's house. This occurs the day before a race, in which Thorndyke is competing, this time driving a red Ferrari 250 Berlinetta. After getting Tennessee drunk on his own Irish coffee recipe, Thorndyke proceeds to tip the remainder of the whipped cream into Herbie's gas tank. At the following day's race, an apparently hungover Herbie shudders to a halt and backfires while Thorndyke blasts to victory.

That evening, Jim returns home in a brand new car, having agreed to sell Herbie to Thorndyke to pay the remaining installments he owes on it. Jim states he needs a "real car" for the upcoming El Dorado road race but finds no sympathy from Tennessee, Carole, or Herbie, who jealously smashes up the car, proving to Jim once and for all he has a mind of his own. By the time Thorndyke arrives to collect Herbie, he is nowhere to be found, and Jim sets off into the night hoping to find Herbie and make amends before the car is seized by Thorndyke's goons. After narrowly escaping being torn apart in Thorndyke's workshop, and a destructive spree through Chinatown, Herbie is about to launch himself off the Golden Gate Bridge when Jim reaches him. In his attempt to stop Herbie from driving off the bridge, Jim himself nearly falls into the water.

Herbie pulls Jim back to safety but then is impounded by the San Francisco Police Department. There, Tang Wu, a Chinese businessman whose store was damaged during Herbie's rampage, demands compensation that Jim can no longer afford. Using the Chinese he learned while in Tibet, Tennessee tries to reason with Wu, and learns that he is a huge racing fan who knows all about Jim and Herbie's exploits. Wu is willing to drop the charges in exchange for becoming Herbie's new owner. Jim agrees to this, as long as Wu allows him to race the car in the El Dorado. If Jim wins, Wu will be able to keep the prize money but has to sell Herbie back for a dollar. Wu replies to this proposal in clear English: "Now you speak my language."

The El Dorado runs through the Sierra Nevada mountains from Yosemite Valley and back. Before the start of the race, Thorndyke persuades Wu to make a wager with him on its outcome. Thorndyke pulls every trick in the book to ensure he and his Thorndyke Special are leading at end of the first leg of the race. As a result of Thorndyke's shenanigans, Jim (with Carole and Tennessee as co-drivers) limps home last with Herbie missing two wheels. Despite Tennessee's best efforts, it looks as if Herbie will be unable to start the return leg of the race the following morning. Thorndyke then arrives and claims that this makes him the new owner of the car. Wu regretfully tells Jim of the wager and that in accordance with its terms this is true. Thorndyke, thinking he is Herbie's new owner, gloats to Jim about what he's going to do to Herbie and kicks Herbie's front fender, but Herbie then unexpectedly lurches into life and chases Thorndyke from the scene, showing he is more than willing to race on.

Thanks to some ingenious shortcuts, Jim is able to make up for lost time in the second leg and is neck and neck with Thorndyke as they approach the finish line. In the ensuing dogfight, Herbie's hastily welded-together body splits in two. The back half crosses the line just ahead of Thorndyke, while the front rolls over the line just behind, meaning Herbie takes both first and third place.

In accordance with the terms of the wager, Wu takes over Thorndyke's car dealership, while Thorndyke and Havershaw are relegated to lowly mechanics. Meanwhile, a fully repaired Herbie chauffeurs the newlywed Jim and Carole away on their honeymoon.

The Disney Wiki has a collection of images and media related to The Love Bug. 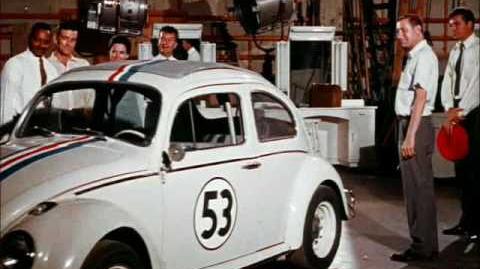 Four theatrical sequels followed: Herbie Rides Again, Herbie Goes to Monte Carlo, Herbie Goes Bananas, and Herbie: Fully Loaded. A five-episode TV series, Herbie the Matchmaker, aired on CBS in the United States in the spring 1982. In 1997, there was a made-for-television sequel which included a Dean Jones cameo, tying it to the previous films. The last entry Herbie: Fully Loaded, was released on June 22, 2005, by Walt Disney Pictures. At Walt Disney World's All-Star Movies Resort in Orlando, Florida, Herbie has been immortalized in the "Love Bug" buildings 6 and 7.