The Magic, The Memories, and You

Celebrate the Magic
On January 18, 2011, a nighttime projection mapping show premiered at Cinderella Castle at Walt Disney World. The show featured photographs and videos of park guests, taken by Disney's PhotoPass employees, combined with projections of Disney characters and attractions and pre-selected music. It was presented before and after the nightly Wishes firework and was part of Disney's "Let the Memories Begin" campaign for 2011. On September 3, 2012, this show was replaced by Celebrate the Magic.

The Disneyland Resort Creative Director Alan Bruun explained that the animated show was presented as if it were a short animated film.[1] 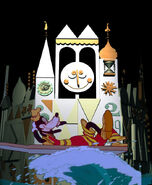 Retrieved from "https://disney.fandom.com/wiki/The_Magic,_the_Memories_and_You?oldid=4464274"
Community content is available under CC-BY-SA unless otherwise noted.