The Magic Feather is a supposedly enchanted feather given to Dumbo and Timothy Q. Mouse in order to grant the former flight.

After mysteriously awakening atop a tall tree, Timothy gets the idea that Dumbo flew up the tree, using his giant elephant ears to do so. Unsurprisingly, not only does Dumbo believe the idea to be ridiculous, but so does a group of crows, who then taunt Timothy's assumptions. After their mocking, Timothy scolds the crows into reformation and helping grant Dumbo flight. The leader crow advises Timothy to innocently manipulate Dumbo into taking the chance at flying, plucking out one of Specks' tail feathers and giving it to him to use as motivation – as the story has it, those who wield the "Magic Feather" will be able to fly.

After a test flight, it is revealed that Dumbo can, indeed, fly, and the newfound talent is taken to the circus for a performance that'll hopefully make Dumbo a star. The act; Dumbo must plummet down from an oversized building into a pool. Although the drop could kill them, Dumbo and Timothy plan on surprising the audience by flying in the middle of the fall, but as they plummet, Dumbo loses the Magic Feather, tarnishing his motivation. Timothy reveals to Dumbo that the feather was just a gag, and at the last minute, Dumbo manages to fly without it.

The feather appears in this series. Instead of being black, the feather is red.

The Magic Feather appears in the remake given the same function as the original. In this film, it is given to Dumbo by a girl named Milly Farrier when he was afraid of jumping off a burning platform during the clowns' firefighter act. Like in the original, he ultimately doesn't need the feather to fly. At first, it is said that Dumbo only flies whenever he inhales a feather through his trunk. However, during the skirmish in V.A. Vandevere's amusement park, Milly gives Dumbo the courage to fly without using a feather and he is able to fly on his own, saving the Farrier family and his mother from the destruction of the amusement park. 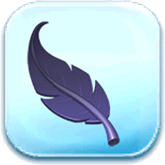 The Magic Feather as a token in Disney Magic Kingdoms