Adventures of the Gummi Bears
"The Magnificent Seven Gummies"

Prince Yen Moon takes the Gummies to the Asian kingdom of Shangwu, to help defend his kingdom against a dragon that is ravaging crops.

But Duke Igthorn and Toadie stow away and seek to see if anything in the Asian kingdom of Shangwu can be used to attack Dunwyn.

...and presents an ancient scroll...

A fake Gummi looking for...

...the Gummies to Shangwu

The palace at night

...arrives in the morning

Farewell to Shangwu
Add a photo to this gallery 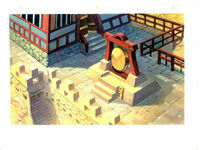 Retrieved from "https://disney.fandom.com/wiki/The_Magnificent_Seven_Gummies?oldid=4561492"
Community content is available under CC-BY-SA unless otherwise noted.