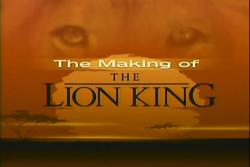 The Making of The Lion King is a behind-the-scenes documentary hosted by Robert Guillaume on the making of The Lion King. It originally aired as a television special to promote the film and was later included with the film's deluxe laserdisc and original deluxe VHS. The special was made in 1994 by The Wrightwood Group and was directed by Dan Boothe.

Retrieved from "https://disney.fandom.com/wiki/The_Making_of_The_Lion_King?oldid=1561647"
Community content is available under CC-BY-SA unless otherwise noted.