After the stories of Jango and Boba Fett, another warrior emerges in the Star Wars universe. The Mandalorian is set after the fall of the Galactic Empire and before the emergence of the First Order. We follow the travails of a lone gunfighter in the outer reaches of the galaxy far from the authority of the New Republic.[1]

The series begins proper with the introduction of The Mandalorian, an enigmatic bounty hunter who is considered one of the best. After accepting a mysterious job from an unnamed client, the Mandalorian is hit with a moral dilemma when he learns that his bounty is a small defenseless infant. Now on the run, the Mandalorian must do everything he can to protect the child even when he discovers that itself hides a secret.

The series was announced by Disney CEO Robert Iger during a Disney quarterly earnings call on November 9, 2017. On May 10, 2018, Jon Favreau revealed during an interview with Anthony Carboni that he was halfway done with writing a season for the coming television series.[5] Favreau confirmed with Dan Casey of Nerdist that the show would take place seven years after the Battle of Yavin and feature all-new characters.[6]

On August 6, 2018, The New York Times reported on Disney+ and stated that the Star Wars television series by Favreau would be expected to cost around $100 million for ten episodes. In an email to The New York Times, Favreau stated that Disney's new streaming service would allow for the opportunity to tell stories that go for several chapters.[7]

The Mandalorian New Season Streaming Oct. 30 Disney
Add a photo to this gallery

A pulse blaster, which the Mandalorian wields 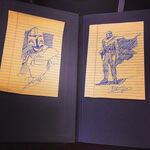 Retrieved from "https://disney.fandom.com/wiki/The_Mandalorian?oldid=4280756"
Community content is available under CC-BY-SA unless otherwise noted.