The Rescuers
Winnie the Pooh

The Many Adventures of Winnie the Pooh is an American animated musical comedy feature film released by Buena Vista Distribution and first released on March 11, 1977. The 22nd animated feature in the Disney Animated Canon, it is based upon the children's stories about the bear written by A.A. Milne, as well as the final chapter of the second story, The House at Pooh Corner.

The film is actually composed of material from three previously released animated shorts:

The film and its characters have spawned an industry of sequels, television programs, clothing, books, and toys.

The film also inspired an attraction of the same name at both Disneyland and Walt Disney World. A much more elaborate attraction, also based on the film, opened in Tokyo Disneyland as "Pooh's Hunny Hunt".

A fourth, shorter featurette, which was added to end the film, was based on the final chapter of The House at Pooh Corner, in which Christopher Robin (Jon Walmsley) has to leave the Hundred Acre Wood behind as he is starting school. In it, he and Pooh discuss what they liked doing together and he asks Pooh to promise to remember him and to keep some of the memories of their time together alive. He agrees, and the film closes with The Narrator saying that wherever Christopher Robin goes, Pooh will always be waiting for him whenever he returns.

The film is the last one in the Disney canon in which Walt Disney had personal involvement, since one of the shorts (Winnie the Pooh and the Honey Tree) was released during his lifetime, and he was involved in the production of Winnie the Pooh and the Blustery Day. The theatrical rights to the Pooh stories were acquired by Disney in 1961 and the original intent was to produce a feature film, but Walt decided to make shorts instead — after production had begun — since he thought the source material was not strong enough to adapt well into a full-length film. All three shorts as well as future feature films boast classic songs by the Sherman Brothers including "Winnie the Pooh" and "The Wonderful Thing About Tiggers".

For Piglet, hand gestures and other movements were used by the animators to create expressiveness, since he (and Pooh) had the appearance of dolls or stuffed animals with relatively simple button eyes. The scene where Rabbit deals with Pooh's being part of the "decor of his home" was not in the original book, but was reportedly contemplated by Disney when he first read the book.

Film critic Leonard Maltin called the original Pooh featurettes "gems"; he also noted that the artwork resembles the book illustrations, and that the particular length of these featurettes meant that the filmmakers didn't have to "compress or protract their script." The film holds a 92% "fresh" rating from critics on Rotten Tomatoes. Surprisingly, its financial records aren't known at all.

Ruth Hill Viguers, however, when writing in A Critical History of Children’s Literature during the 1960s, mentioned Disney’s Winnie the Pooh along with several other Disney adaptations as having "destroyed the integrity of the original books".

The American Film Institute nominated the film for its Top 10 Animated Films list.

The film was first released on VHS, Betamax, CED video record, and laserdisc in the early 1980s. In 1996, it was re-released on VHS as part of the Masterpiece Collection and included video footage of the making which was shown before it starts. It was released on DVD for the first time in 2002 as a 25th Anniversary Edition, with digitally restored picture and sound. The individual shorts had also been released on their own on VHS in the 1990s.

The 25th anniversary edition DVD includes, among other bonus features, "The Many Adventures of Winnie the Pooh: The Story Behind the Masterpiece", which documents the history of the books and their initial film adaptations. It also features interviews with animators Ollie Johnston, Frank Thomas, and Burny Mattinson, as well as the Sherman Brothers, Paul Winchell, and others. Digital Media FX reviewer Shannon Muir stated that the audio and video quality of the film on this DVD was very high.

The "Friendship Edition" DVD was re-released on June 19, 2007. All of the special features from the previous "25th Anniversary Edition" DVD were recycled; the only new addition being an episode of Playhouse Disney's computer-animated series My Friends Tigger & Pooh. The DVD re-release coincides with the 30th anniversary of the release of the film.

The Blu-ray version was released on August 27, 2013 along with the third DVD release and includes the current voice actors. The bonus features included a Mini Adventures of Winnie the Pooh segment, "Geniuses" and the only bonus feature that was kept from the previous DVD releases was the "Winnie the Pooh" theme song music video performed by Carly Simon.

Main article: The Many Adventures of Winnie the Pooh (soundtrack) 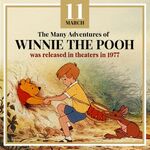 Japanese version of the film

Walt Disney Pictures released a sequel, simply called Winnie the Pooh, on April 15, 2011 in the United Kingdom, and on July 15 of the same year in the United States.