Disney Wiki
Register
Don't have an account?
Sign In
Advertisement
in: Films, Make Mine Music, 1946 shorts,
and 2 more

The Martins and the Coys

The Martins and the Coys

English
The Martins and the Coys is an animated short of the segment in Make Mine Music. It was reissued as a stand-alone short on June 18, 1954.

The backdrop of a hillbilly feud provides the setting for a Romeo and Juliet story. The short is mainly a parody of the real life feud between the Hatfields and the McCoys.

Down in the valley lived two hills of two disputed families. They were the Hatfields and the McCoys who were feuding each other all day. The families were all in a feud using their weapons across the hills just as the battle across the feud led in a gruesome result.

Following a massive battle between the Hatfields and the McCoys, Grace Martin sets out to make the Martin family proud but instead decides to fall in love instead despite their families' feuds. Falling in love with Grace, the Hatfields and the McCoys were all angry about Grace and Henry getting married; Grace and Henry perform a hoedown with the other people at Possum Track School to which they enjoyed a wonderful dance together in a happy marriage together.

Grace Martin and Henry Coy were both married, but sometimes they have arguments and disputes, in these feuds Henry and Grace fight just as fiercely as their relatives much to the joy of the other Hatfields and Coys. 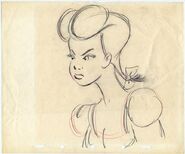