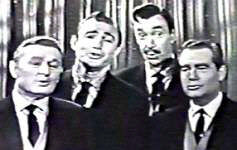 The Mellomen were a popular singing quartet active from the late 1940s through the mid-1970s. They were founded by Thurl Ravenscroft and Max Smith in 1948. They recorded under a variety of names, including Big John and the Buzzards, The Crackerjacks, The Lee Brothers, and The Ravenscroft Quartet. They were sometimes credited as The Mellowmen, The Mello Men, or The Mellow Men. They sang backup to some of the best-known artists of the day, including Rosemary Clooney, Bing Crosby, Doris Day, Arlo Guthrie, Frankie Laine, Peggy Lee, Elvis Presley, and Jo Stafford.

In addition to backing up popular singers, their solo work is part of many Disney films such as Alice in Wonderland, Peter Pan, Lady and the Tramp, and The Jungle Book as well as numerous animated shorts, including Trick or Treat (1952), Pigs is Pigs (1954), Paul Bunyan (1958), and Noah's Ark (1959). Their work for Disney also led to numerous television appearances, beginning with the Disneyland television show episode "Cavalcade of Songs", originally broadcast February 16, 1955, as well as "The Coyote's Lament", originally broadcast March 5, 1961, in which, in the voices of a chorus of coyotes, they sang "Yip Yip Yip Yow". They were also featured frequently on Disneyland Records, which released their 1958 album Meet Me Down on Main Street. They also sang "The Scarecrow of Romney Marsh" theme and the introduction of Zorro. They performed singing voices for the elephants and, later, the vultures, both along with J. Pat O'Malley in The Jungle Book. They also performed "Yo Ho (A Pirate's Life for Me)" for the Disneyland version of Pirates of the Caribbean.

They sang on several films with Elvis Presley, beginning with It Happened at the World's Fair. Elvis wanted the Jordanaires to perform for the film but they were unavailable, so The Mellomen were called in to sing One Broken Heart For Sale and Cotton Candy Land. They later backed up him on the title song for the film Roustabout as well as on most of the sound track for Paradise, Hawaiian Style. In 1969, They appeared with him in the film The Trouble with Girls, as a gospel group called The Bible Singers.

The Mellomen singing to Walt Disney

The Mellomen during a recording session of Lady and the Tramp 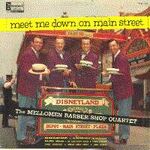