The Merry-Go-Round Broke Down

Why Don't You Do Right?

“Quite a loony selection for a group of drunken reprobates.”
―Judge Doom

"The Merry-Go-Round Broke Down" is a song written in 1937 by Cliff Friend and Dave Franklin. It is best known as the theme tune for the Looney Tunes cartoon series and Merrie Melodies reissued cartoon series produced by Warner Bros. Cartoons. Roger Rabbit sings it to entertain barflies in Dolores' bar, and Eddie Valiant later sings it to make the Toon Patrol laugh themselves to death. These are not the actual lyrics to the song; they were written for the film only. Since pretty much all of the Looney Tunes are friends with both Roger and Eddie, it stands to reason that Roger and Eddie would be familiar with the song.

The song's melody was used in the DuckTales episode, "Metal Attraction", in which a version of the song, with alternate lyrics, is performed by the Singing Chocolates.

Roger Rabbit:
Oh, Roger is my name
And laughter is my game
C'mon, cowpoke
It's just a joke
Don't sit there on your brain

Love to raise some cain
Believe me, it's no strain
It feels so great
To smash a plate
And look, there is no pain... (record starts skipping) no pain... no pain...

Eddie Valiant:
Now Roger is his name
Laughter is his game
C'mon, you dope
Untie his rope
And watch him go insane

This singin' ain't my line
It's tough to make a rhyme
If I get stuck
I'm out of luck...

Eddie:
I'm through with taking falls
I'm bouncing off the walls
Without that gun
I'd have some fun
I'll kick you in the...

Eddie (spoken):
No, but this does.

Oh, what fun, a wonderful time
Spending love for only a dime 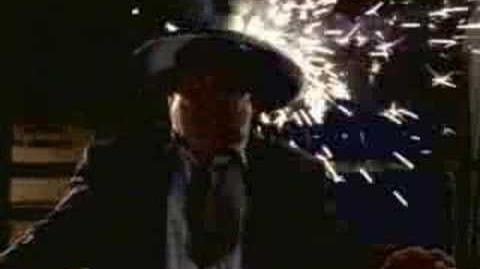 Retrieved from "https://disney.fandom.com/wiki/The_Merry-Go-Round_Broke_Down?oldid=4059917"
Community content is available under CC-BY-SA unless otherwise noted.