"The Mickey Mouse Anniversary Show" is an episode of Walt Disney's Wonderful World of Color. It aired on December 22, 1968.

In celebration of Mickey Mouse's 40th birthday, we take a look back at Mickey's long showbiz career; from his debut in Steamboat Willie, his immense popularity in the 1930s, a look at the Mickey Mouse Club television show to becoming the official host of Disneyland. 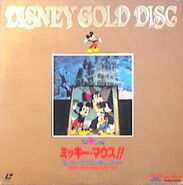 Add a photo to this gallery
Retrieved from "https://disney.fandom.com/wiki/The_Mickey_Mouse_Anniversary_Show?oldid=4013632"
Community content is available under CC-BY-SA unless otherwise noted.