The Mickey Mouse Theater of the Air was a musical-variety radio series for children, sponsored by Pepsodent toothpaste and heard on NBC. Broadcast from the Disney Little Theater on the RKO lot from January 2 to May 15, 1938, the program was created to promote the February 1938 release of Snow White and the Seven Dwarfs. In addition to Snow White (January 9, 1938), other shows in the series included "Mother Goose Land", "Cinderella", "King Neptune", "The Pied Piper", "The Old Woman in the Shoe", and "Old MacDonald".

Walt Disney did the voice of Mickey Mouse for the first three episodes. John Hiestand was the announcer for this Sunday afternoon program. Starting with the fourth episode, Mickey was voiced by comedian Joe Twerp. Disney appeared as himself in some early episodes. In later episodes, Disney was too busy to attend performances, and he was impersonated by announcer John Hiestand.[1] Radio actor J. Donald Wilson provided the voice for one episode.[2]

Music was provided by the Felix Mills Orchestra, Donald Duck's Swing Band and The Minnie Mouse Woodland Choir. The opening theme music was "Who's Afraid of the Big Bad Wolf?" and the closing theme was "Heigh Ho". 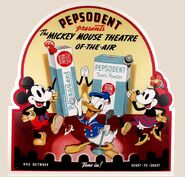 Retrieved from "https://disney.fandom.com/wiki/The_Mickey_Mouse_Theater_of_the_Air?oldid=3750465"
Community content is available under CC-BY-SA unless otherwise noted.