$5.1 million (North America) (rentals)
The Million Dollar Duck (also titled as The $1,000,000 Duck) is a 1971 Disney comedy film that was directed by Vincent McEveety, and stars Dean Jones, Sandy Duncan, and Joe Flynn.

The film centers on the family of a scientist named Albert Dooley (Dean Jones) who struggles to pay the bills. His wife, Katie (Sandy Duncan), gets a recipe for applesauce wrong and gives it to her husband to take to work for lunch, hoping it will help cut down on the budget. In a humorous chain reaction, the duck Albert is testing steals the applesauce after Albert has thrown it away in the trash, and then wanders into a radiation lab and becomes irradiated. Albert is ordered to get rid of the duck, so he figures he can give it to his son, Jimmy (Lee Montgomery) who has been wanting a pet, only to discover it now lays golden eggs.

In a Pavlovian manner, the duck, "Charlie" (despite being female), lays an egg when prompted by the barking of a dog. At first, the only ones who know of Charlie's golden yolks are Albert, Katie, Jimmy and Albert's friend, Fred, but as they sell the yolks of gold, they gain the attention of a suspicious neighbor, a government bureaucrat named Mr. Hooper (Joe Flynn), who starts spying on them (with typical Disney slapstick results such as falling off a tree branch when) his wife gets angry, and ultimately convinces his boss, Rutledge (James Gregory), to get the duck after worldwide phone calls spread the rumor and Rutledge gets a phone call from President Richard Nixon to "get that duck!". Albert is overcome by greed and no longer cares for his son, which saddens Jimmy. The FBI soon arrives at the house and orders them to turn over the duck. Jimmy, watching from upstairs, climbs out the window with Charlie, and then rides off with a couple of teenage boys and their hot rod as the FBI try to capture the duck to prevent it from laying gold.

In the film's climax, Jimmy is suspended on a ladder between two parking garages, and Albert attempts to convince his son to grab his hand before the ladder falls. Jimmy tells his dad to "go away", believing he only wants to save Charlie, but when the ladder begins to break, he grows fearful and grabs his father's hand. They then leave the parking garage, but Albert is promptly arrested by the FBI. The film ends with the family in court, and the judge breaks an egg into a glass after Mr. Hooper barks at the duck to prompt the laying of the egg, which surprisingly turns out to be an ordinary egg yolk, as a result of Mr. Hooper barking at it in the wrong tone. The judge dismisses the charges on account of no proof of a duck laying golden eggs, and Albert tells the family the golden duck was nice while it lasted, but at least they can keep the duck for their pet, now realizing that his family is more important than wealth. The judge then advises Jimmy, "One word of caution, son. If it ever lays another gold egg, bury it, quick!" Albert then picks Jimmy up and exits the courthouse into a crowd of cheering onlookers. 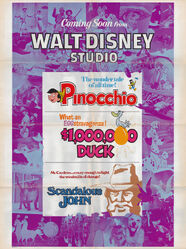 This film is featured in a preview poster of summer 1971 releases, along with Scandalous John and a re-release of Pinocchio 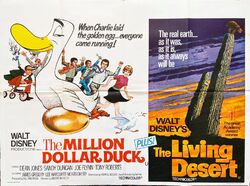 Poster from the release in the United Kingdom on August 8, 1971, on a double bill with a re-release of The Living Desert