Sport Goofy in Soccermania
DuckTales the Movie: Treasure of the Lost Lamp

On top of Killmotor Hill in Duckburg

“A day without looking at me Money Bin is like a day without sunshine!”
―Scrooge McDuck[src]

The Money Bin is a large storage building where Scrooge McDuck houses his three cubic acres of cash. Scrooge has a great affection for his money, and his favorite hobby is to dive and swim around in the money in his bin. The building and the surrounding lot are full of booby traps, burglar alarms and other contraptions to fight off Scrooge's countless uninvited guests, like panhandlers, beggars, door-to-door salesmen and, most importantly, crooks who try to break into the Bin (most often the Beagle Boys). It was originally featured in the Uncle Scrooge comic book stories created by Carl Barks. It has also been featured in many of Scrooge's animated appearances, such as Scrooge McDuck and Money, Sport Goofy in Soccermania, and DuckTales.

As shown in Don Rosa's 1994 comic The Invader of Fort Duckburg, the Money Bin was built shortly after Scrooge moved to Duckburg. In the DuckTales episode "Once Upon a Dime", Scrooge reveals that he built the bin because he had entered the diamond market and could no longer sleep at night because all the money he was storing under his mattress raised his bed too close to the ceiling, necessitating a more suitable storage facility for his money. Scrooge's favorite pastime is to dive off a springboard into his money and swim through it.

The traditional location of the Money Bin is on top of Killmotor Hill. The money bin sits atop Futterman's Fault, a fault line which would prove catastrophic in the event of an earthquake. In the 2017 reboot series, the bin was moved to a secluded island location off the coast of Duckburg. It also features a boardroom where Scrooge meets with his executives and two basements floors. The first known as the McDuck Archive and the second is Gyro Gearloose's underwater lab.[1]

The 2001 story "The Beagle Boys vs. the Money Bin" contains two pages with detailed plans for the Money Bin. These drawings were done by Dan Shane[2].

The Money Bin as it appeared on DuckTales

The Money Bin as it appeared in Sport Goofy in Soccermania

Petty Cash Vault in "The Trouble with Dimes"

The Money Bin in DuckTales the Movie: Treasure of the Lost Lamp

The Money Bin after being taken over by Dijon in the movie.

The Money Bin in an Italian comic

The Money Bin under attack in DuckTales: Scrooge's Loot

The Bin in the reboot series

The Money Bin in Disney Infinity 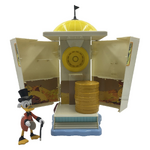 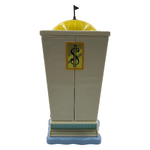