English
The Moon-Spinners is a 1964 American Walt Disney Productions feature film starring Hayley Mills in a story about a jewel thief hiding on the island of Crete. It was based upon a suspense novel by Mary Stewart and was directed by James Neilson. It was Mills' fifth of six films for Disney, and featured the legendary silent film actress Pola Negri in her final screen performance.

Hayley Mills stars as Nicky Ferris who is spending time in Crete at a small inn called The Moon-Spinners with her Aunt Frances (Joan Greenwood). One day, she discovers a handsome young man, Mark Camford (Peter McEnery), wounded in an empty church nearby. It turns out that Mark was once a London bank messenger, but he lost his job after a major jewel robbery. Tagged as a suspect, Mark has made his way to The Moon-Spinners, to gather evidence against the owner, Stratos (Eli Wallach), who Mark thinks is the real jewel thief. Nicky and Mark fall in love and decide to capture Stratos together.

The lead character is somewhat younger than in the novel. Traveling alone in the book, she is accompanied by her aunt in the film. It is somewhat dark, similar to other Disney live-action features made in the '50s and '60s for more mainstream audiences such as 20,000 Leagues Under the Sea and Treasure Island. It was Walt Disney's penultimate live-action film in which he was credited as producer while alive.

Disney convinced silent film actress Pola Negri, who had been retired for two decades, to return to the screen for this, her final film. Both Mills and Wallach were interviewed extensively about their work with Miss Negri in The Moon-Spinners for the 2006 biographical documentary film Pola Negri: Life is a Dream in Cinema.

Hayley Mills in The Moon-Spinners 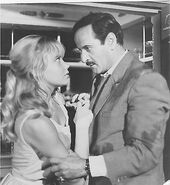 Hayley Mills and Peter McEnery
Add a photo to this gallery

Retrieved from "https://disney.fandom.com/wiki/The_Moon-Spinners?oldid=4512253"
Community content is available under CC-BY-SA unless otherwise noted.