The Muppet Christmas Carol: Original Motion Picture Soundtrack was initially released in 1992 in conjunction with the film's premiere. It was reissued alongside the Disney's Kermit's anniversary edition DVD in 2005.

The album contains the original score by Miles Goodman, as well as all of Paul Williams' songs for the film, including the cut songs "Room in Your Heart" and "Chairman of the Board," which were recorded but never filmed. 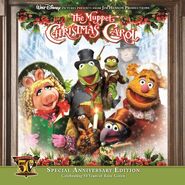 CD, 2005
Walt Disney Records
61414-7
Add a photo to this gallery
Retrieved from "https://disney.fandom.com/wiki/The_Muppet_Christmas_Carol_(soundtrack)?oldid=3709611"
Community content is available under CC-BY-SA unless otherwise noted.